Wizkid faces lawsuit in Uganda, could be arrested by Interpol

An Ugandan show promoter, FACE TV, has filed a lawsuit against Ayo ‘Wizkid’ Balogun for failing to honour a performance engagement in the East African country.

According to a letter sent to Interpol by Muwema & Co, solicitors of FACE TV, an arrest warrant has been issued for the singer and Sunday Are, his manager, by the chief magistrate court of Buganda Road.

The Nigerian was said to have missed the concert billed to hold on Saturday, December 3, as a result of “unavoidable circumstances”.

The ‘Ojuelegba’ singer was expected to fly into Uganda from Los Angeles, U.S., for the concert which was to take place at Lugogo Cricket Oval in Kampala.

In the letter addressed to Interpol Central Bureau of Kampala, Muwema & Co requested for the issuance of a red alert against Wizkid and Are.

“Our client then incurred substantial expenses in booking and re-booking flights, hotel, venue, advertising and promotions for the concert, which expenses grossed over $300, 000. In the meantime, more than 25,000 Ugandans paid for tickets in advance.

“To our client’s dismay, Wizkid and his troupe did not show up for the concert despite assurances to the contrary which were made up to the very last minute.” 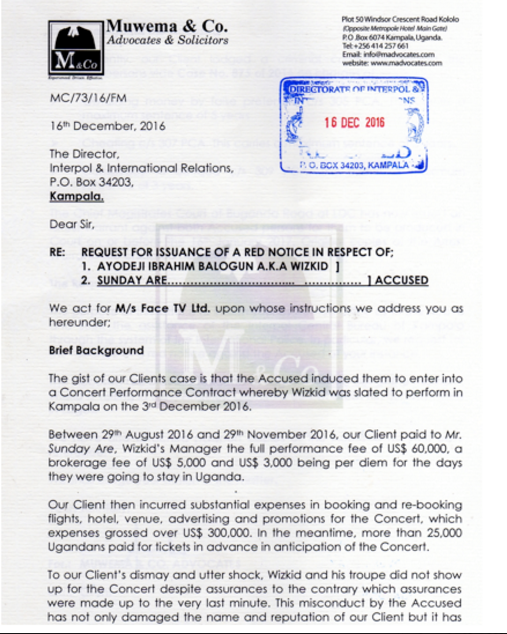 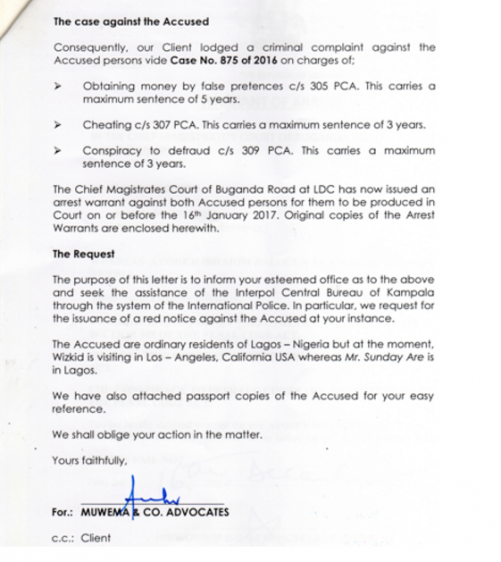 The criminal complaints filed against Wizkid and Are carry a maximum jail term of eleven years.

The letter also indicated that Are and Wizkid are to be produced in court on or before January 16, 2017.

Wizkid is currently on a doctor-ordered break in the United States after an exhaustive two years of touring and performing around the world.

The artiste’s manager is yet to respond to inquiries sent to him by TheCable Lifestyle.