A lion who loves to roll up from time to time and another who supposedly has a frog voice have been enmeshed in a social media spat for weeks.

Many say it is a publicity stunt, and owing to the fact that all the artistes involved are working on fresh projects, it may well be.

But then, it has been interesting and it’s worth a share.

It all started in June when Wizkid and Davido appeared to exchange veiled swipes on social media – without actually mentioning each other’s names.

The exchange culminated in Wizkid saying a certain “local” champion should not be jealous of the international stage success of his peers – especially as he failed to make hay with his own foray.

Then, much recently, Davido accepted the title of “local” on ‘Summer Body,’ his new collaboration with Olamide.

“With Yankee passport, they say we local. You better catch up, I’ll see you later,” he sang.

His tweet turned the controversy a notch higher as fans picked sides and blogs lapped it up.

While fans were in the process of taking him apart for his tweets, ‘lion’ Wizkid took it upon himself to do the honours.

And just in case anyone was in doubt about who the duck was, he promptly clarified.

Wizkid’s tweets ignited a flood of comments, reactions, as well as memes of a duck and frog on Twitter.

Why are Nigerians like this? Someone said that IPhone and Samsung dey quarrel (Davido and Wizkid) then Tekno wan com join pic.twitter.com/Ix2t4g04EA

While the storm was yet to subside, MC Galaxy, who has struggled to have a major hit in a minute, took to Instagram to take a dig at Tekno.

Funny how CEOs who control 100% of their income are talking while an ordinary employee that rarely takes home 20% is trying to interfere. Abeg stay humble! We know say you never reach their levels. Let's just sit and watch because if two Elephants dey fight, Na ground dey suffer am. You make hits, we make Money! #SHUPE

Cynthia Morgan, not one to shy away from controversy, jumped on his case and promptly informed him that his post was out of place.

She has since deleted her posts – but screenshots will suffice. 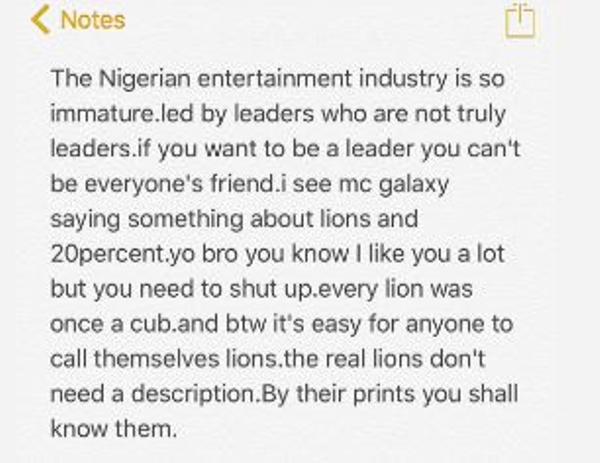 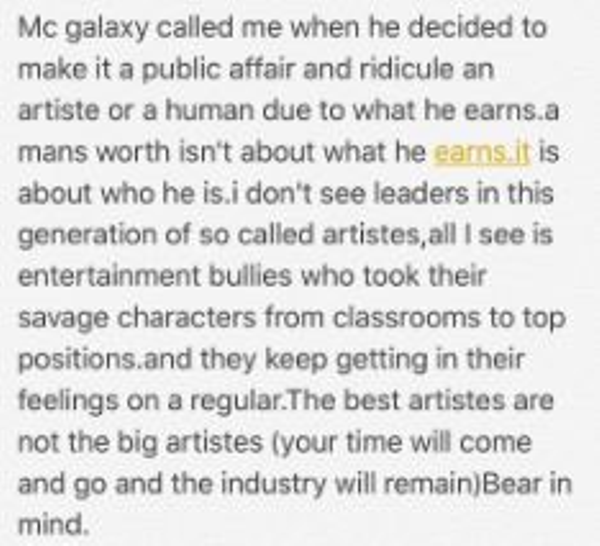 While the young guns threw swipes back and forth and fans relished the show, a voice of reason — from an industry elder/Wizkid’s former boss Banky W — boomed in the midst of the social media chatter.

"What's better than one billionaire? Two" What's better than one of our Artists conquering the world? Two? Three? 10?? All?? Wish we would all just quit the mud slinging and get back to pushing the movement forward. When you're running a race, if you stop to throw stones at every dog that barks, you'll never reach your destination OR you'll get there much later than you should. And.. a mud fight may seem like fun, but in the end, everyone just comes out looking like shit. Food for thought. #TheBankStatements Nobody wins when the #FamilyFeuds

Tekno, meanwhile, has issued a hard-to-grasp response to the “attention” that’s “falling” on him.

And then, he revealed his real intentions.

I came here to grow my twitter page! Look what we’ve done! Followers fall on this account!👌🏽

The “duck” also offered to produce a track for one of the “lions”.

Oya pls don’t be offended! Forgive and forget.. let me produce a track for you 🤝

Joeboy: I was humiliated as kid for owing school fees

Nollywood veteran, who died after ‘battle with diabetes’, to be buried in March