Wizkid, the Nigerian Afrobeats hitmaker, has changed his name to ‘Big Wiz’ on his Instagram page.

Before now, there have been fans who suggested a shift away from the “-kid” suffix in the 30-year-old singer’s official stage name to signal his growth over the years as well as his emergence in the global music industry.

But checks by TheCable Lifestyle at Wizkid’s Instagram handle on Monday showed he had adopted “Big Wiz” as his profile name. 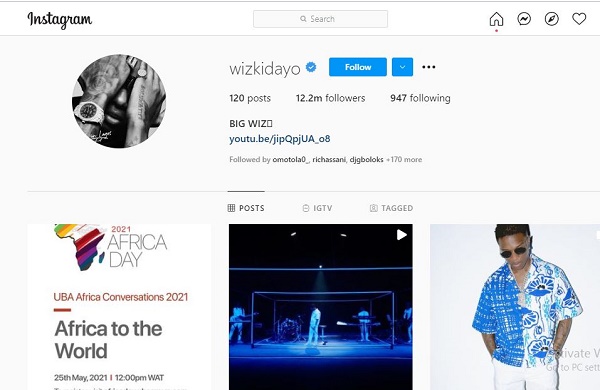 The change came without prior announcement, leaving observers unsure as to whether or not it’s an official stage name change.

But his Twitter page, as of the time of this report, had still retained the name “Wizkid” despite being active.

Born Ayodeji Balogun, Wizkid started recording music at the age of 11 and released a collaborative album with the Glorious Five, a group he and a couple of his church friends formed.

He signed a deal with Empire Mates Entertainment (EME) in 2009 and rose to prominence after ‘Holla at Your Boy’, the lead. In 2016, he got global recognition for ‘One Dance’, his collaboration with Drake, a Canadian rapper.

Wizkid snagged his first-ever Grammy recognition last March for his role in ‘Brown Skin Girl’, a song by Beyonce.