Williams Uchemba says it’s a good thing that the Super Eagles of Nigeria failed to qualify for the 2022 World Cup in Qatar.

The comedian and actor spoke in the context of the heightened insecurity in the country and the repeated attacks on citizens.

The Black Stars of Ghana qualified for the World Cup on Tuesday after playing a 1-1 draw with Nigeria.

This earned Ghana one of the five tickets for African representatives at the tournament billed for Qatar this year.

The outcome of the match has sparked a chorus of condemnation among Nigerians on social media, with some angry fans vandalising the Abuja stadium.

Uchemba said so be it if missing out on the World Cup would make Nigeria pay serious attention to the pressing issues in the country.

“Maybe it’s good we lost, so we can channel our anger on the pressing issue in the country. Almost 1000 Nigerian citizens cannot be accounted for and some people are acting like it’s a normal thing,” he wrote on Instagram.

“If it takes losing a match to get us upset enough and know that we are in a hell hole, so be it. Some heads of state are yet to make a statement on the issue. I guess they are busy planning for 2023 [elections].” 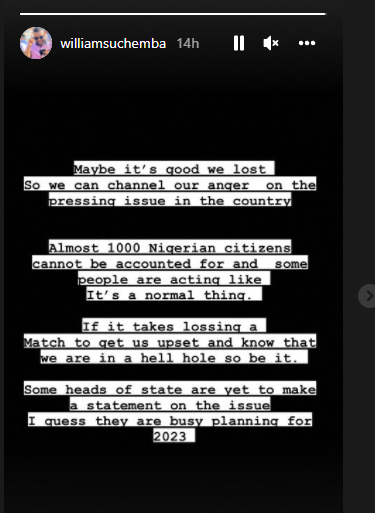 A train from Abuja was earlier attacked by gunmen in the Kateri-Rijana area of Kaduna on Monday night.

Amid unsafe roads, the railway station in Gidan, Kaduna state, was also invaded by gunmen in another attack.

Earlier on Saturday, gunmen had attacked the Kaduna international airport and killed a security guard.

Yemi Alade: Why I might never do collaboration with Tiwa Savage

Yul Edochie: Sex-for-jobs has wrecked many men, especially in Nollywood