Uzodinma Iweala, the author of Beast of no Nation, is set to premiere a short film based on the abducted Chibok girls.

Entitled Waiting for Hassana, the film which delves into the life of Jessica is in Hausa and has no subtitles.

It centers around the 276 teenage girls who were abducted by Boko Haram insurgents in 2014 from their school in  Chibok, Borno state.

Jessica, an escapee, shares her haunting account of a friendship violently interrupted by Boko Haram insurgency.

Iweala said he was inspired to write the film by his mother, Ngozi Okonjo-Iweala, a former finance minister. 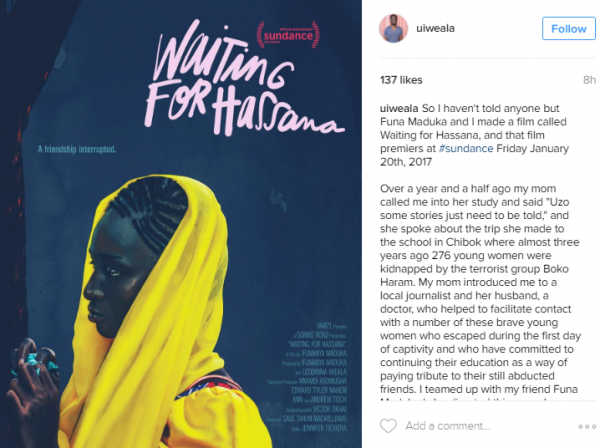 “Over a year and a half ago my mom called me into her study and said “Uzo some stories just need to be told,” and she spoke about the trip she made to the school in Chibok where almost three years ago 276 young women were kidnapped by the terrorist group Boko Haram.

“A film like this is the result of so much teamwork and intense passion. My hope is that it adds to an important and ongoing conversation about a crisis in a country we love,” said Iweala via his Instagram page.

First time director, Ifunanya Maduka, also said, “A year ago today, filming commenced on a short documentary that aimed to tell the story of loss and resilience in the wake of the brutal kidnapping of 276 school girls from #Chibok in northern Nigeria.”

Waiting for Hassana will be premiered at Sundance Film Festival on Friday, January 20.

VIDEO: How SARS officials ‘killed man, fled with his car’ in Delta