Hushpuppi, an Instagram celebrity, who was accused of money laundering by the Federal Bureau of Investigations (FBI), was on Monday denied bail by a US court in the northern district of Illinois.

The self-acclaimed influencer was arrested last month in Dubai alongside 11 associates after he was alleged to have committed crimes including hacking, impersonation, scamming, banking fraud, and identity theft.

Following his extradition to the United States, he had been arraigned and detained at Chicago’s Metropolitan Correctional Center (MCC), from where he hired a lawyer in defense of himself.

But, according to a new report, Huspuppi, who is better known as Ramon Igbalode, was denied bail, with a judge ruling that he would remain detained until his trial later this year. 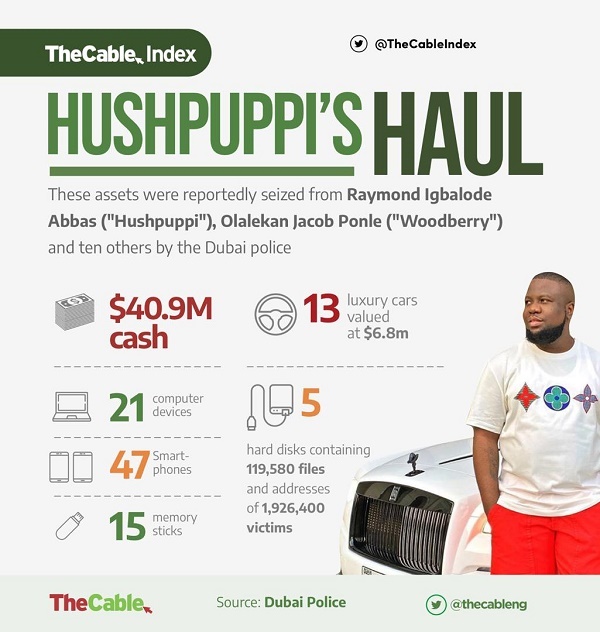 It was gathered that the court held that he would be transported to Los Angeles and will not be allowed to stay with his girlfriend’s uncle in Homewood, Illinois.

It is also understood that his trial will hold in Los Angeles where the case was filed, rather than Chicago where the investigation is being handled, although his lawyer said he wasn’t a flight risk.

The United Arab Emirates police had shared footage of Hushpuppi’s arrest in a special operation dubbed ‘Fox Hunt 2’ over cyber-fraud involving 1.9 million victims to the tune of N168 billion.

He was recently charged with the conspiracy to commit money laundering, one for which he could get a maximum jail term of 20 years if convicted.

Hushpuppi is known for his luxury lifestyle, which sees him flaunt expensive vehicles, dine with celebrities, and spread pictures of his glamorous home’s state-of-the-art furniture on social media.

His Instagram page, which boasts of over 2.4 million followers, consists of posts of him posing all over the world with luxury bags, a fleet of Rolls Royce’s, private jets, helicopters, yachts, posh watches and also chilling in five star hotels.

Igbalode, who has been accused of cyber-fraud in Europe, America and Nigeria, had once told his followers that he posts about his luxury life to inspire others to make more of their lives.