Change is constant but it’s quite difficult to picture an aged Nigerian man in his traditional garb, staring down at a smartphone, putting out a flurry of tweets or thinking of Instagram captions and hashtags.

But in 2016, the only way our ‘leaders’ can efficiently communicate with their ‘followers’ is through social media.

Some of these politicians display characteristics of vengefulness and pettiness while others stick to the script and convey useful information to the citizens.

While some have social media aides when unavailable, here are ten Twitter-active politicians in Nigeria. 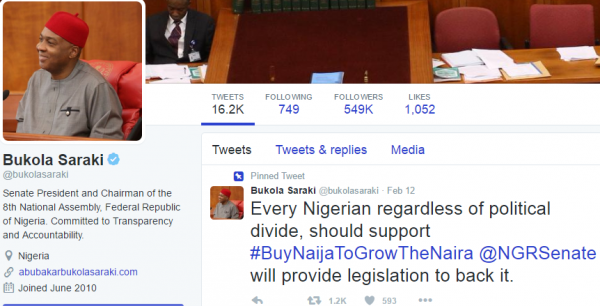 Saraki is currently the president of the Nigerian senate and was once the governor of Kwara state.

An excerpt from his Twitter bio says he’s “committed to transparency and accountability.”

Saraki’s activity on the micro-blogging platform centers around the daily actitivites of the senate. 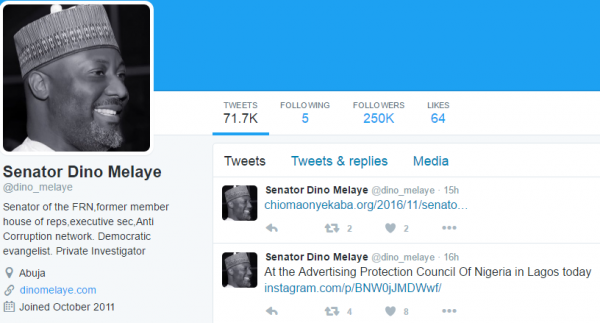 Dino Melaye is a member of the 8th national assembly, representing Kogi West.

Since joining Twitter in 2011, he’s been an ardent user of the platform – where he regularly tweets, posts pictures and retweet tweets he’s mentioned in.

Melaye, who has over 250,000 followers, is known to use his Twitter account to taunt opponents and also to champion causes.

Dogara is the 8th and current speaker of the federal house of representatives.

The speaker is not as controversial as some of his peers on Twitter. He often uses the medium to share important information about himself and the country to his 127,000 followers.

Dogara also used his Twitter account to counter the budget padding claims made against him by suspended lawmaker, Abdulmumin Jibrin. 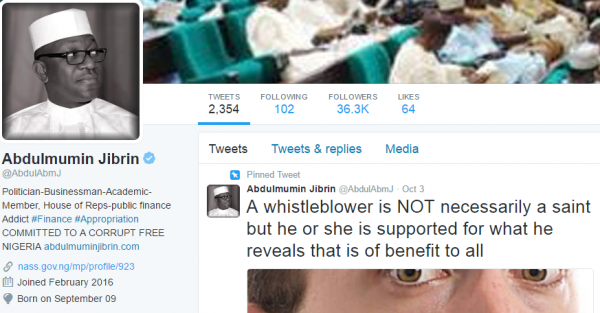 Abdulmumin Jibrin is a Nigerian politician, businessman, and academic who belongs to camp of the All Progressive Congress (APC).

With over 36, 000 followers on Twitter, Jibrin, who says he’s committed to a corrupt-free Nigeria.

Jibrin has most notably used his handle to make allegations of budget padding against principal officers of the federal house of representatives.

His account has been extremely vibrant for most parts of the year, with allegations, exposes and accusations emanating from there on a regular basis.

The president of Nigeria has over 782,000 followers on Twitter.

President Buhari uses the medium to update the general public on the workings of the government.

Atiku is the second elected vice-president in Nigeria.

The father of 26 children is very interactive on the platform as he even made efforts to reply well-wishers on his birthday.

Atiku often interacts with his followers and sometimes, starts conversations.

The incumbent governor of Kaduna state has close to a million followers on Twitter.

In his bio, he wrote, “Tweets are my views not those of the APC.” A fail-safe so that misplaced words won’t reflect on the ruling party.

El-Rufai often shares intellectual contents, posts or articles on his Twitter feed as well as activities of his government.

Shehu Sani is a Nigerian Senator from the Kaduna central district and he uses Twitter to speak to his over 98, 000 followers.

Shehu is not one to bite his tongue as he’s wont to bluntly air his views on politics, government and social issues no matter whose ox may be gored.

The senator is a famous opponent of Nasir El-Rufai.

The 60-year-old governor-elect of Ondo state used his Twitter page intensely during his campaign to amass the support that got him elected.

It remains to be seen if he’ll continue to be active after getting into office. 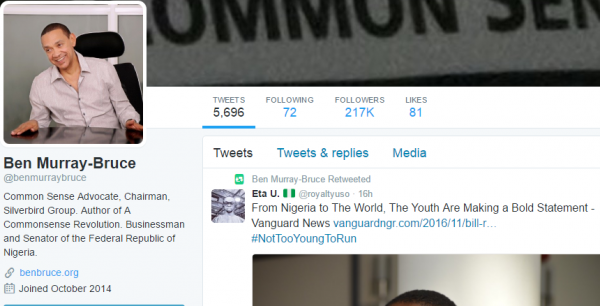 Better known as the ‘Twitter Senator’, Murray-Bruce has become popular for being vocal about his plans for a better Nigeria and how to achieve it.

Ali Baba: Why this election campaign season is low-key