The tweet announcing the death of Chadwick Boseman has so far raked in 6.6 million likes — the highest in the history of Twitter.

Twitter disclosed this via its verified handle, saying the landmark is “a tribute fit for a King”.

His family announced his demise on the late actor’s verified Twitter page on Saturday.

The tweet has so far been liked 6.6 million times and garnered over 3 million retweets and comments as of the time of filing this report. 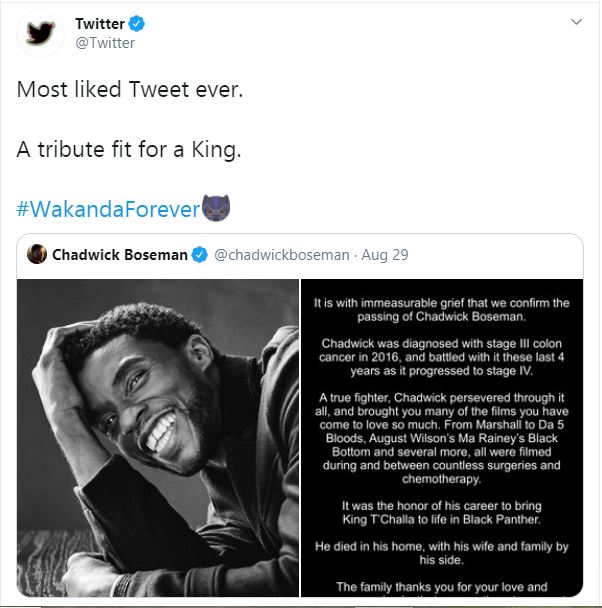 The statement said the 43-year-old “King T’Challa” of the fictional “Wakanda”, died in his home with his wife and other family members by his.

It added that the role of King T’Challa was the “honour of (Boseman’s) career”.

Boseman was born and raised in Anderson, South Carolina, and got his start in an episode of ‘Third Watch’ in 2003.

Tributes have been pouring in for the late movie star as words of his death spread.

You can read TheCable’s obituary for Boseman here.

Report: Michael Jackson earned $400m in the past year

DID YOU KNOW? Ozonna, Soludo’s son, is a singer who dropped debut EP in 2015

Ubi Franklin: I used to cry whenever they hit me on social media