TRENDING: 300-level student ‘withdraws’ from UNILORIN after ‘encounter with Christ’

Abolarin Akin Jephthah, a 300-level student of the University of Ilorin (UNILORIN), has notified the school management of his decision to withdraw from the institution.

Jephthah, an undergraduate in the sociology department made this known in a letter addressed to the N. Y. S. Ijaiya, professor and deputy vice-chancellor Academics, University of Ilorin.

In the letter, the student revealed that he obtained his West African Examinaions Council (WAEC) result through examination malpractice.

He based his decision on his newfound realisation that his foundation was faulty and as such, cannot continue to be a student of UNILORIN.

The letter was addressed to the DVC on August 12 and received on August 15. 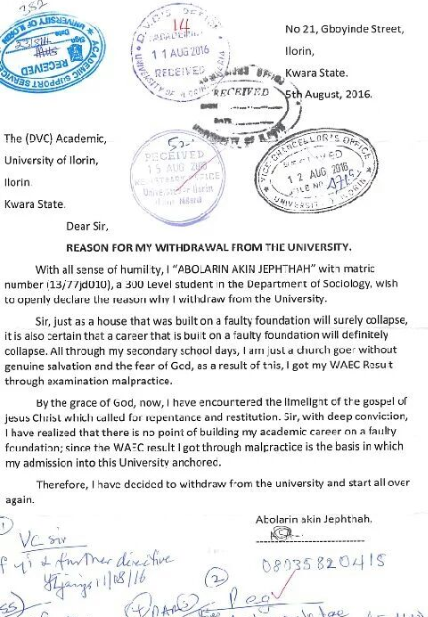 “With all sense of humility, I ABOLARIN AKIN JEPHAH with matric number (13/77jd010), a 300 level student in the department of socilogy, wishe to openly declare the reason why I withdraw from the university. Sir, just as a house that was built on a faulty foundation will definitely collapse.

“All through my secondary school days, I am just a church goer without genuine salvation and the fear of God, as a result of this, I got my WAEC result through examinaion malpractice.

“By the grace of God, now, I have encountered the limelight of the gospel of Jesus Christ which called for repentance and restitution.

“Sir, with deep conviction, I have realised that there is no point of building my academic career on a fault foundation, since the WAEC result I got through malpracice is the basis in which my admission into this university anchored.

“Therefore, I have decided to wihdraw from the university and start all over again”, Jephthah added.

TheCable Lifestyle has reached out to the school management to determine the veracity of the letter and to ascertain the institution’s standpoint.