Tonto Dikeh, Nollywood actress, singer and humanitarian, says she is “super upset” that witches pressed her chest while she was asleep on Sunday night.

The controversial film star took to her Instagram story on Monday to pour out her rage about a nightmare she had and blamed herself for not being steadfast in prayers.

“Woke up from the worst nightmare. Dear witches, it is not your fault. I do not blame you people. Na me wen nor dey pray. At my age in the little kingdom, little witches still have the mind to press my chest. I am super upset, embarrassed to say the least,” she wrote. 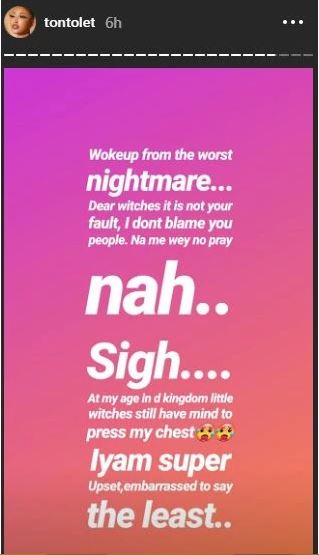 Although the 34-year-old single mother of one had recently been meddled by marriage-related controversies, Dikeh has left impressive records and made quite an influence in the entertainment space over the course of her acting carer.

She recently landed a N100 million deal with Zikel cosmetics as a brand ambassador and became the first Nigerian to sign an endorsement deal involving such a high sum — which is to be paid annually by the African makeup brand.

In May 2019, the talented actress granted a three-part interview where she made outrageous claims about Olakunle Churchill, her ex-husband.

She claimed that the IT business mogul is an internet fraudster, is involved in spiritualism, and that he last for only “40 seconds in bed.”

Dikeh also slugged it out with him after Churchill petitioned the inspector general of police and accused her of forging credentials to facilitate the illegal sales of his N22 million Toyota Prada SUV left in her custody.

Screenwriter: Why we replaced Ayolola with Pere in ‘The Men’s Club’