A token was returned for formality, says Tonto Dikeh on paying own bride price

Tonto Dikeh, Nollywood actress, says that the bride price returned by her family was done out of formality and respect to her former in-laws.

When news of her marital crisis came to a head, the 32-year-old actress had said that she gave ex-husband, Olakunle Churchill, the money to pay her bride price.

After videos showing her family returning the bride price paid to the Churchill family emerged on Tuesday, fans started insinuating the former singer lied about paying her own bride price.

An Instagram user @cutie_juls put up a post in defence of the actress saying: “All those insulting Tonto because Tonto’s family were seen refunding Tonto’s bride price to Churchill lack common sense, I’m afraid.

“Why would anyone jump to a conclusion that she lied that money used in paying her bride price is hers just because it’s been refunded to Churchill’s family?

“So do you think both Tonto and Churchill were going to tell their families when they were getting married that the money for the bride price was hers and not his?

“Do you think a father would have given his daughter’s hand in marriage to a man who couldn’t afford the basics like bride price?

“You all should shut up already. Do you know the amount of things women do for themselves but give their men the glory just because we want them to look responsible in the eyes of the public?”

In response, Dikeh, who was formerly signed to DB Records, a label owned by D’Banj, wrote: “Honey don’t worry your head too much; we involved know the truth. For formality and respect a token has to be returned to them no matter what.

“The truth may be silent for a while but it sure can’t hide for long, You need not address this issue. I asked for a divorce I was denied for months but God worked it out and I got it.” 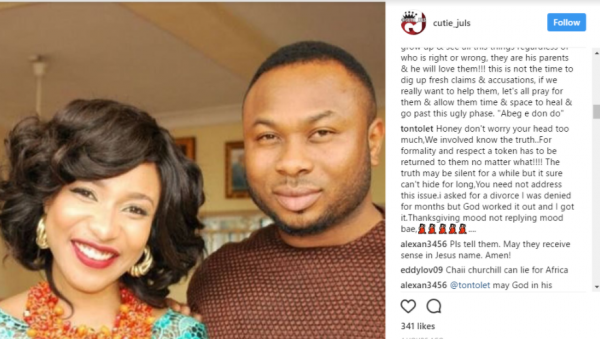 Wiz Khalifa to launch ‘Behind the Cam’ docuseries on Apple Music

VIDEO: 2Baba visits Sound Sultan’s grave in the US