Tiwa Savage, Nigerian songstress, has sparked reactions on social media after she announced her decision to boycott an upcoming show scheduled to hold in Johannesburg because of the recent xenophobic attacks on foreign nationals, especially Nigerians, in South Africa.

The ‘All Over’ crooner took to Twitter on Wednesday to reveal that she will not be performing at the DSTV delicious festival scheduled to hold on the 21st of September.

She also condemned the killings and sent her prayers to the affected victims.

“I refuse to watch the barbaric butchering of my people in SA. This is SICK. For this reason, I will NOT be performing at the upcoming DSTV delicious Festival in Johannesburg on the 21st of September. My prayers are with all the victims and families affected by this,” she wrote. 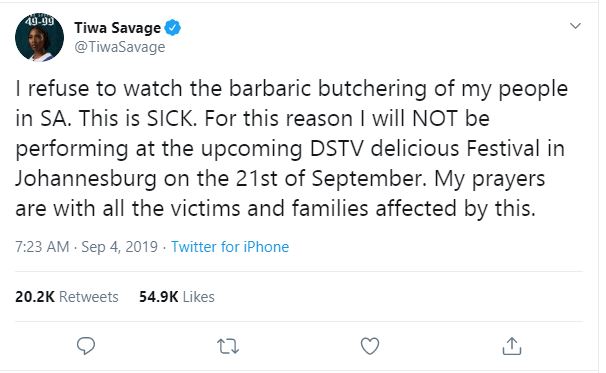 The award-winning singer is one of the many Nigerian celebrities who have expressed their annoyance at the xenophobic attacks in South Africa.

Burna Boy had slammed AKA, South African rapper, over his tension-inciting comments about Nigeria’s relationship with South Africa, while Wizkid stated that South Africans are “fighting the wrong war”.

Fans and critics alike of both nations have taken to social media platforms, especially Twitter, to express their diverse opinions on the singer’s decision.

While a number of users — especially from South Africa — expressed their indifference to her decision, stating that “she is not as popular with them as she thinks”, others — mostly Nigerians — defended her, saying even supposedly “lesser artists in Nigeria are bigger than the most popular celebrities in South Africa”.

“We don’t care Tiwa, stay there, you’re not Beyonce,” a Twitter user said.

“South Africans coming for Tiwa & asking who is she. What? The biggest celebrity in your country is an OAP, Bonang, so you can’t relate. Like your biggest celeb is Osi’s mate. Babes Wodumo that should have been as big as Tiwa, her boyfriend beat the musical talent out of her,” another Twitter user said.

Here are some of the top reactions:

Some South Africans are rubbishing Tiwa
& lauding AKA & their local champs

Zlatan has more intentional hits than the biggest act in SA. The whole of South African region has no Tiwa match at all pic.twitter.com/IfDFNtG8n1

We don’t care Tiwa, stay there, you’re not Beyonce. https://t.co/F9KHKNXaCH

Tiwa Savage honestly thinks we’re bothered whether she comes to SA or not. Wow!!

Tiwa Savage made the right decision by cancelling her show. Performing in a country, where her people are being attacked, dehumanised and killed would be an insult to her country and people.

Do we even know Tiwa or her songs mxm

Who knew Tiwa Savage was coming to SA on the 21st ? pic.twitter.com/hbV0Ar8QW7

South Africans coming for Tiwa & asking who is she. What?

The biggest celebrity in your country is an OAP, Bonang, so you can’t relate. Like your biggest celeb is Osi’s mate.

Babes Wodumo that should have been as big as Tiwa, her boyfriend beat the musical talent out of her.

How many of us didn’t know that Tiwa Savage was coming to perform at the DSTV delicious Festival in Johannesburg on the 21st of September this year. pic.twitter.com/xFEmWryyWI

If only they knew how amaPiano and Sho Madjozi makes South Africans happy, people like Tiwa Savage wouldn’t have been saying things she’s are saying now.

Nigeria is the King of Afro Pop. Tiwa, Burna, Wizkid and other won’t come to South Africa again.

Tiwa Savage just wanted to be relevant in South Africa since majority didn’t know her or what she does for a living.Many knows 21 Savage here… pic.twitter.com/mXbEkHkdNs

Burna Boy, Davido, Ice Prince and Tiwa. I get that they are big in their respective countries, but will them not coming to South Africa anymore affect South Africans? Njani?

Hi Tiwa, you seem to be misinformed… A S.African Taxi driver was shot dead by a Nigerian drug dealer. This then caused the looting of foreigners shops (not the here said butchering of your people). Every action has a reaction. & Delicious Fest will still be LIT on the 21st💃🏾 https://t.co/CiUVg2vYV4

I think tiwa should have still gone and used the opportunity to spread unity and call on SA government to get their acts right .. two wrongs don’t make a right .cancellation would only heighten tension and separation.SHE SHOULD HAVE GONE AND CONDEMNED THE ACT IN THEIR OWN LAND..

Tiwa Savage is a silly little girl wanting to sound woke on issues she’s knows nothing about. Shame!

When Burna Boy was acting Giant yesterday and attacking people up and down, y’all claiming he’s an AFRICAN GIANT.

Tiwa Savage canceled her show to join the protest, you’re saying that’s not the way forward

That’s great Tiwa. Am a Ghanaian and is so pathetic to see human burning, throwing people out from a story building, shooting and butchering their own fellow human being. Their generations shall definitely pay for it.

#XenophobiaInSouthAfrica A lot of these S/Africans on twitter are so silly. Tiwa Savage cancelled her show in your country as a protest against xenophobia, just the way other countries have been doing since yesterday. So saying you don’t know who she is, is irrelevant and stupid.

Sunny Ade: My family asked me to stop music because it’s for unserious people

Lyta blocked my blessings… I’ve achieved much since leaving him, says baby mama