Tchidi Chikere, the Nigerian filmmaker, has revealed how his marriage to Nuella Njubigbo ended.

He spoke about his failed marriage while hailing Yul Edochie, the actor who has come under criticism for marrying a second wife.

Chikere, in an Instagram post on Thursday, claimed Njibigbo packed up and snuck out of their matrimonial home.

A critic had slammed Chikere for supporting Edochie.

“He is still better than you, at least he has stayed with one woman for 17 years. You cant even keep one woman for 2weeks! Retard,” the critic, named Itohowo Eden, wrote.

In his response, Chikere said: “My first marriage lasted 11 years, my second lasted 7 years until she took her things and sneaked out of the house.

“The problem with some of you women is you think you run the world because men don’t talk. Maybe one day I’ll tell my story if I feel I really need the love of one-track-minded people like you. Now get off my page or shut up.” 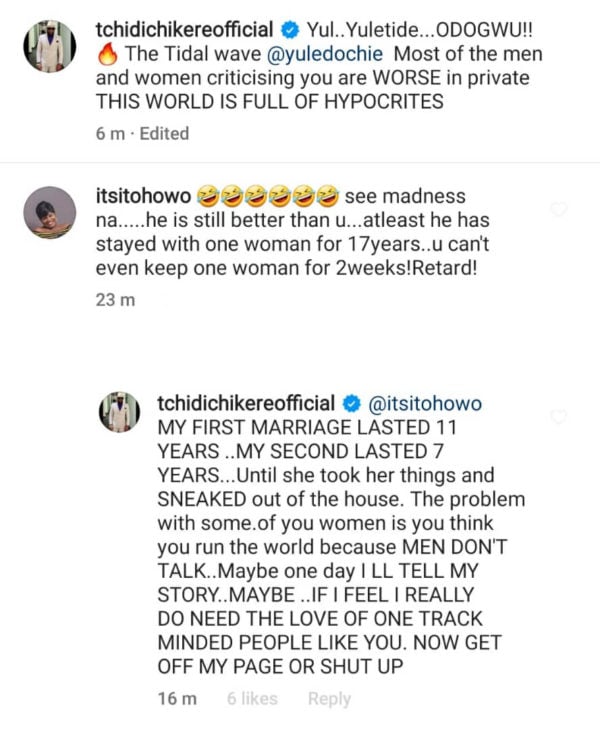 Chikere and Njubigbo were rumoured to have divorced in 2021 after they unfollowed each other on social media.

Chikere married in March 2014 and they had a daughter together.

He also had three other children from his previous marriage to another actress Sophia Williams.

Bella Shmurda says ‘yahoo yahoo’ not something to be proud of