Tacha-Erica narrative, BBNaija disqualification and what it means for Laycon

Many argue the curve is skewed towards Tacha, a Big Brother Naija (BBNaija) 2019 housemate, when the comparison on aggressive tendencies and the inclination for controversies pits her against Erica, a recently disqualified participant of the show’s ongoing edition. But, irrespective of personality differences, similar narratives got the duo kicked out.

Back in 2019, Tacha had earned an uncanny reputation for her frequent verbal exchanges with her colleagues, something that had eventually climaxed in a physical confrontation that involved a shame-clapping of hands and retaliatory pulling of hair. Tacha’s altercation with Mercy, a colleague who registered her disgust with her, gained more fuel after the latter had claimed the former stunk.

Trouble had started when Seyi, who was then the head of the house, called the other housemates to come out to the lounge so they could read Biggie’s scroll. Mercy came out late — a situation that got Tacha furious and prompted the usage of provocative words on her fellow housemate who didn’t take it lightly. Tacha, thereafter, launched a verbal attack on her colleague after which a fight began.

“You are a moron, remain there, and don’t come out. Clout chaser, old woman, you keep using your body to get everything you want. You have been using Ike (a male housemate in the house at the time) to get what you want. You can’t stand eviction that is why you need Ike to help you,” Tacha had furiously fired at Mercy, whom many viewers of the show had considered her major rival.

Mercy, who immediately responded with a ferocious verbal attack, fired back at her saying, “You are very stupid, you Instagram beggar. Go and treat your body odour before you talk to me, you stink. At least, I have a boyfriend (Ike) to get me what I want. What has your boyfriend done for you?”

In no time, the fight had them facing judgment with Biggie, the show’s instructive voice.

Biggie would later find Tacha guilty of breaking the house rule of physical violence and intent to harm, the moment she shoved Mercy and when she pulled her hair on two separate occasions. After her removal from the show, Tacha had admitted she needed to work on her emotions while apologising to her fans.

“My weakness played against my strength and cut short what should have been a grand ending, with or without the prize. I sincerely apologize for every action on my part that led to this point and I take full responsibility for it all. I am an adult and ought to be in control of my emotions. Please forgive me. I sincerely wanted to make it, at least to the 99th day,” the reality TV star had explained.

For Erica, a now-former housemate of the show’s 2020 edition, her abrupt disqualification didn’t follow after condemnatory claims hinged on personal hygiene but more about a dramatic romance story that had surreptitiously and gradually sent her hurtling down the path to the BBNaija’s exit door, starting with two out-of-the-blue strikes (sanctions) from Biggie for breaking the house rules.

Erica had been at odds with Laycon since after she ditched him for Kiddwaya, another of the show’s male participants. Laycon had confessed his feelings for Erica but the latter turned down the former’s request for a serious relationship, stating she would still not have accepted his proposal even if Kiddwaya had not come into the picture.

Amid the rejection, things went awry between the two as the tension exacerbated after Erica and Kiddwaya were caught on camera kissing in the HoH Lounge. For breaking the rules on whispering and misuse of the head of house (HoH) lounge, Biggi gave Erica two strikes, warning that one more of such infractions to her name would put her up for removal. And it eventually did.

Erica was in a dicey position, yet, she didn’t keep calm when she got wind of claims that she had attempted smooching with Laycon despite her blossoming relationship with Kiddwaya. She would later confront Laycon but as the musician refused to address the issue and clear her name, Erica flared — throwing up provocative verbal missiles in a fight that later landed her Biggi’s final strike.

This event, beyond making Erica — who had a shot at reaching the definitive days of the show — the third housemate to be removed since BBNaija’s inception and after Kemen in 2017, replicated what played out with Tacha. Both housemates shared a somewhat fiery personality when it came to addressing unfolding squabbles with their peers, an attribute that placed them among the most talked about housemates. 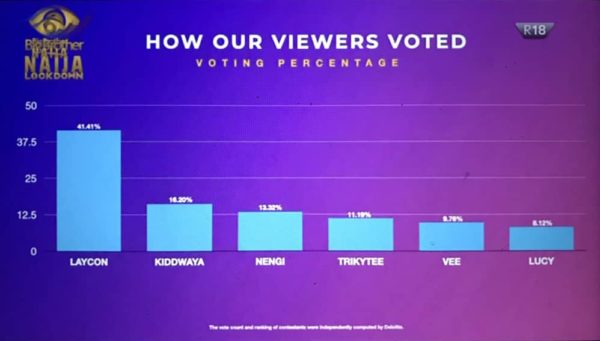 Yet, there’s this subtle but observable pattern that continues to play out, so much so that it becomes suggestive of what Erica’s removal might mean for the eventual winner. Back in 2019, Tacha battled Mercy Eke and the latter emerged the winner of the ‘Pepper Dem’ edition. A lot can change subsequently, who knows? But Laycon’s numbers, no doubt, continue to reinforce his dominance.

Google celebrates ‘Nigeria at 59’ with a doodle