The first time Seun Martins had a computer to himself for hours at a stretch was when his sister got a Windows desktop computer for an IT programme she was taking.

Martins had the luxury of such close proximity to the computer because he was at home — as Nigerian universities were on one of their many strikes.

His interest in programming was ignited at a time when he had already gone far in his degree programme in pharmacology. His parents could not be swayed but Martins knew what he wanted, and through sheer will, determination and occasional compromises, he landed in Andela.

In this spotlight interview, Martins shares with TheCable Lifestyle the story of his foray into software engineering, his fellowship with Andela and plans for the future.

What is your story? How did you get into Andela?

Back in Olabisi Onabanjo University, I wanted to go study medicine. But I didn’t get admission to study medicine. I got pharmacology which is like pharmacy but more research-oriented. In the second semester of my third year, my sister who already graduated at that time wanted to do her post-graduate studies. She picked information technology, so she had to buy a laptop and we lived together. So, I had access to her computer. It was hooked up to the internet so I was able to really explore the web for the first time. ASUU was on strike so I was at home not doing much.

School resumed and as you can imagine, I was already getting double-minded because what I was doing initially wasn’t what I really wanted to do, but I still had to go to school. I still managed to finish the degree. When I finished, I started reconsidering. As you can imagine, I had issues with my parents regarding my reconsidering to start something else. At the time, I was falling in love with computers and that was what I was spending my whole time doing.

I started talking to a bunch of guys that I knew studied computer-related stuff, asking how I could get into it because I had a degree already and I knew my parents would not have funded another one. NYSC came and I had to ship myself all the way to Cross River. There I met one guy, Tosin, who graduated with a first class in computer science from the University of Ibadan and he offered to start showing me the ropes. He started encouraging that I could learn it on my own and get hired by a company and it sounded good.

For about three weeks, in camp, in 2012, I started learning the basics. After camp, we got split up when everybody went to their places of primary assignment. They took me to a village and while there, I met another guy who was also a computer science graduate employed as a software engineer. His name is Chidi. He started helping me out too but we could only go so far because I didn’t have a laptop so it wasn’t really grounded but he planted some seeds. 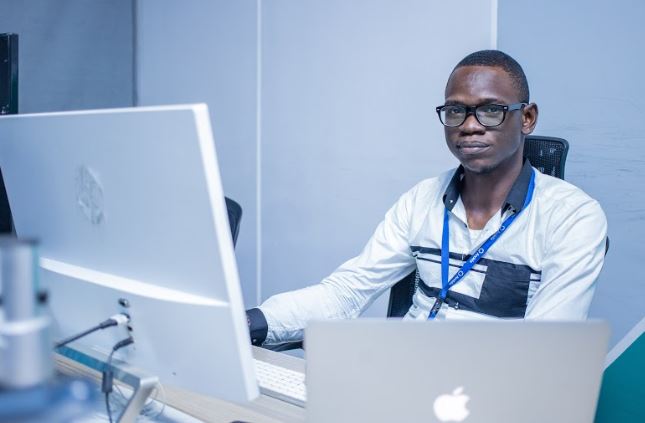 When was the point that you actually took the first major step?

NYSC was over. I came back home and I told my parents that I didn’t care what they thought and that I was going to pursue a computer-related career.

They were expecting me to go further into medicine or go for my masters. They called a bunch of people to talk sense into my head. I left home and went to stay with my friend who was still in school studying medicine at that time.

I got a teaching job, saved up some money and got a laptop and was trying to remember what they had taught me in school. Tosin was back in UI to do his masters in computer science.

Yes, UI gave him a scholarship to do his masters. Hearing that, I was like ‘okay, I’ve got to go to Ibadan’. Because I did not know anybody in Ibadan, I had to persuade my parents to allow me to apply for masters in pharmacology(what they wanted) in exchange for their permission to explore some other things and go to Ibadan for a computer program while I was waiting for admission.

So, I got back to Ibadan and hooked up with Tosin again. That’s when I really started understanding what programming was all about. After that time, there was a strike so he had to move to Lagos to get a job and I had to start doing things on my own.

It was hard learning by myself since he was no more there. You know support is really important so I started trying to see if I could enter any software engineering firm as an intern.

No, in Lagos. It was hard finding a place in Lagos. When I came to Lagos, the first place I went was Anakle in Ikoyi. They interviewed me but I was told that my skills were not good enough for even an internship position.

Along the line, Iyinoluwa Aboyeji started posting on Twitter that he wanted to start this company that was going to give people all the tools and everything that they need to become good software engineers and that he was going to support them and give them projects to work on.

That was just perfect, so I applied, went for the interview and spoke with them. They picked me for the boot camp. I went for it, then they picked me to start the programme. That was in June 2014. 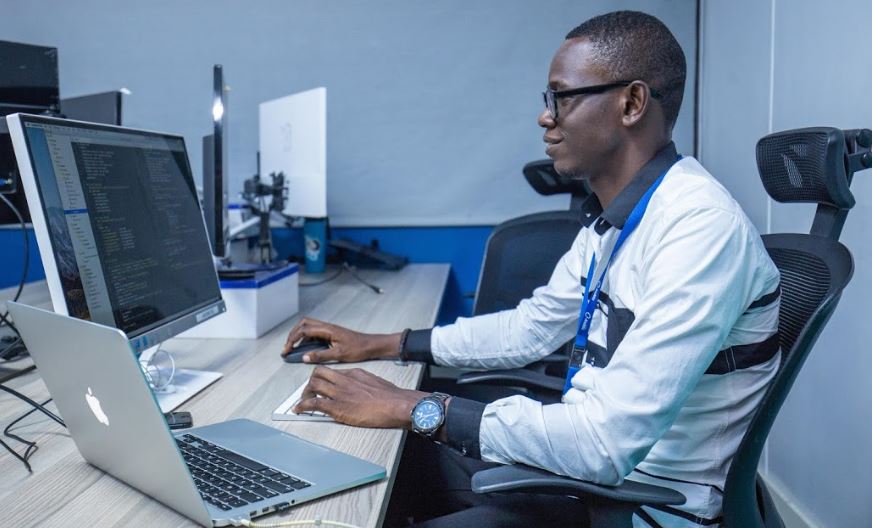 So, it was the knowledge from the little training you had that got you in?

From that little stuff, I was able to show the things I had been able to come up with by myself in two, three, four months.

The guy doing the interview was like ‘okay that looks good, if you’re able to do this by yourself, we can give you more support and you would be able to learn more’, so I think that’s why I took the chance and I came into the boot camp where I got accepted eventually.

Getting into Andela; was it like a fish on land, considering the fact that you had never been in that setting, you had just been learning on fringes?

The interesting thing is if you really want to learn and you apply yourself and have the mindset to learn, with the support structure that Andela gives you, you can accelerate how fast. I kept asking them questions. I asked the mentor also. So it was just leveraging the resources being provided and I was able to start picking up bit by bit.

It was challenging. There were times when we were taught more stuff than we could handle but I didn’t give up because I know there was nowhere else I want to go.

How long have you been at Andela?

When will you round up your programme?

In all that time, what’s the biggest thing you’ve achieved?

I’ve worked for two major partners for Andela. The first one is a community building organisation. They are into bringing groups of people with similar interests together. They started with entrepreneurs (organising conferences) and we were building the tools to connect those people and give them intelligence about who need to connect with who. That was my work for those guys. I liked the fact that I was with them at the point when they had only one community and they were able to scale it up to 12 because the plan was not to just have one.

The company is based in Boston. So with the learnings of the first community, they were able to get a partnership with Forbes so all the communities Forbes was starting were supplied with tools we built.

That was like the first major team I worked for in Andela. That was a really interesting one.

The next partner I worked with is in the e-commerce space. They were building e-commerce tools for online retailers. That was a really interesting one too. So we did the tools that enabled people to launch online stores for free. We did it for free. When they want to host it or need support services; that’s when we make money.

Is it still available?

Yes, it’s still available. The company is called Reaction Commerce. I’ve been with them for over a year now. I’ve moved around teams with them so it’s interesting particularly for me because I’m not doing one thing that I’d been doing before. 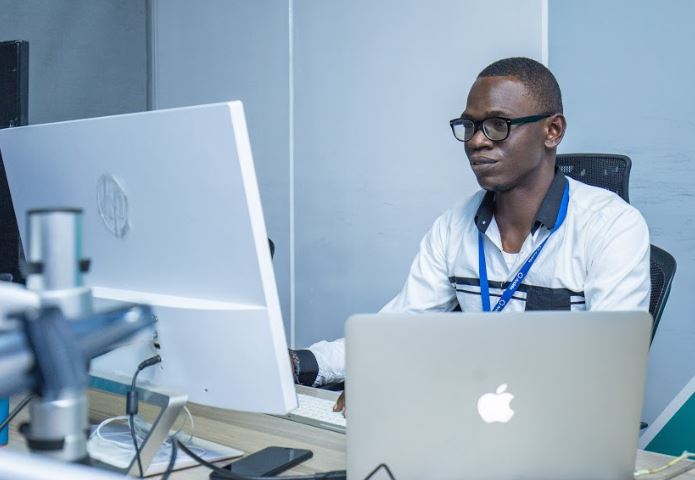 I’m very very hardcore on engineering so I still want to do a lot of that. Research engineering. So my plan is to be in a startup where I get to do more software engineering work.

It doesn’t have to be my own. I have plans of probably doing a startup of my own in the future but my twist on it is that when I want to do something in my environment I’m a bit focused on hard tech and how we can use it to solve more of the challenges that we have.

I feel like software goes as far as the tech that’s available.

We don’t have to restrict how we solve problems to software alone. I’m open to solve a bunch of other problems that involve you having to create some form of tech. I’m much more of a general technologist and that is what comes to mind when I think of business and entrepreneurship.

Are you thinking of going for a top-paying gig?

When I say I’m gonna work at a company, of course, they’re going to pay me and I’m not cheap.

If you had not seen Iyinoluwa’s tweet, and Andela didn’t come into the picture, where would you be?

Yes, I think I would still continue trying because at that point in time, that was all I wanted to do. So, even as I was in the recruitment process with Iyin, I remember I was talking to Seun Osewa, the founder of Nairaland, to see if I could get something with him, because I understand that to learn as fast as you can, you have to be in that space with people that are doing similar things.

I’d have still kept pushing to be in one of those places. I have friends who are not in Andela right now but I encourage them to see how they can get into a team somewhere.

Police arraign man ‘who boasted about beating wife on Facebook’