Quaden Bayles’ story is a truism that a lot can happen within the space of few days. On Saturday, the nine-year-old Aboriginal Australian boy led a National Rugby League’s indigenous all stars team into the stadium amid cheers and applause, with a smile on his face.

The event was part of the team’s preparedness ahead of their exhibition match against the New Zealand Maoris. The Maori All Stars won the game 30-16, with Bayles getting a pitchside view

This followed an invitation extended to Bayles by the team, announced by Latrell Mitchell, its captain, in a video.

“We’ve got your back and just want to make sure that you are doing alright… we want you around, we want you to lead us out on the weekend,” Mitchell said.

With a smile etched on his face, the little boy held a ball with one hand and the other in the grip of Joel Thompson, the team’s star.

This, however, followed tumultuous moments he had gone through earlier.

Yarraka had some days back shared a heartbreaking Facebook live video to raise awareness of the impact of bullying.

Bayles, who can be seen crying in the footage after he was said to have endured bullying at his Brisbane school, is said to have achondroplasia — a rare bone-growth disorder and the most common form of dwarfism. 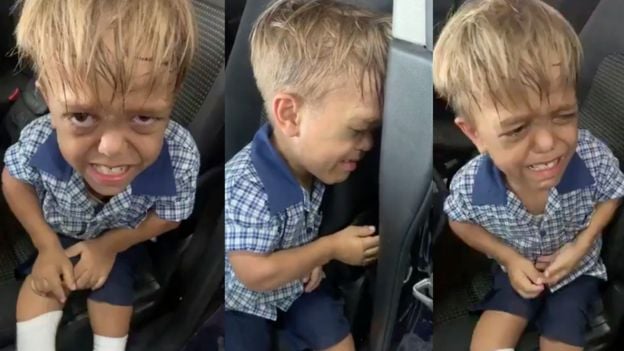 According to the National Institutes of Health (NHS), the average height of an adult male with achondroplasia is 4 feet, 4 inches.

The NHS added that the “characteristic features of achondroplasia include an average-size trunk, short arms and legs with particularly short upper arms and thighs, limited range of motion at the elbows, and an enlarged head.”

In the now-deleted footage, Yarraka disclosed that her son had previously attempted suicide.

“I’ve just picked my son up from school, witnessed a bullying episode, rang the principal, and I want people to know – parents, educators, teachers – this is the effect that bullying has,” she said in the six-minute video, which got over 20 million views in a few days.

“Every single… day, something happens. Another episode, another bullying, another taunt, another name-calling. Can you please educate your children, your families, your friends?.

“On top of that, being an Aboriginal boy with a disability, people don’t understand that’s a double-edged sword. There’s racism and then there’s discrimination because of the disability.”

Regardless, it has successfully caught the attention of several celebrities including Hugh Jackman, Australian actor, who posted a video message on Twitter telling Bayles: “No matter what, you’ve got a friend in me.”

“Quaden, you are stronger than you know, mate,” Jackman wrote. “Everyone, let’s just please be kind to each other. Bullying is not OK, period.”

The video also caught the attention of Brad Williams, US comedian, who launched a GoFundMe for the brave kid and his mum.

Williams, who like Bayles has dwarfism, said the money will be used to pay for flights, accommodation, meals and tickets to Disneyland in California.

“I myself have dwarfism. I myself was bullied as a child and with social media sometimes continue to be bullied. It really broke my heart when I saw Quade and I want to do something about it,” he said.

“I’ve set up a GoFundMe to send brave Quaden and his mother to Disneyland. Let’s show a bullied kid that he is loved.”