SPOTLIGHT: Meet Tofunmi — the female trucker who started driving at 22

Shortly after graduating from secondary school, and passionately searching for what might fill a growing chasm between furthering her education and getting a job, like a lion charging toward its prey, Tofunmi Adeyemi Adediran grasped the opportunity of driving a truck.

And for the past four years, she has been propelling the heavy vehicle across cities and states in Nigeria, spiraling through smooth and dangerous alleys and roads with an attentive flair of a competent driver.

She was just 22 years when she gave in to her utmost desire of doing what many ascribed to be a “man’s job”.

But initially, her mother wasn’t going to have that. “I wouldn’t allow my precious daughter to put her life at risk at this young age,” Tofunmi quoted her mom as saying.

Tofunmi’s mother would later give in after the intervention of her elder sister and father. 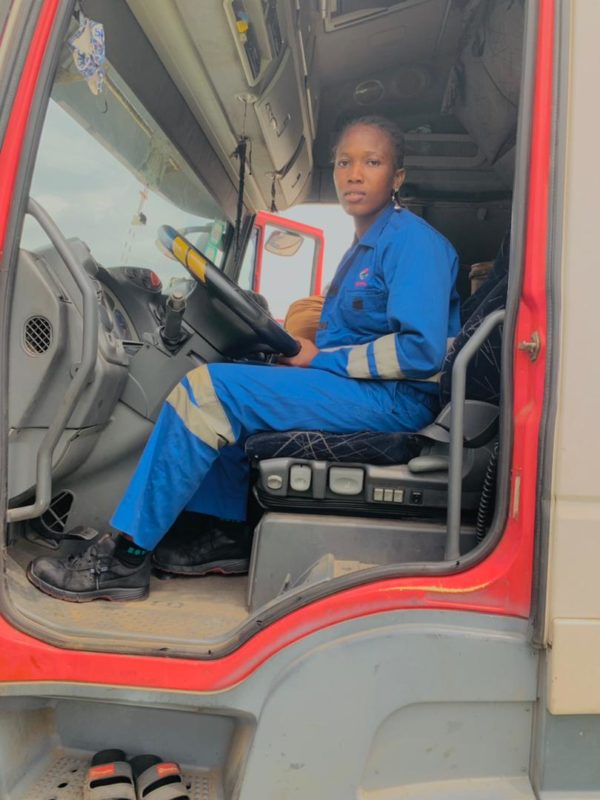 The day she was first introduced to her employer, he looked at her with sheer shock and was initially skeptical about taking her in due to her gender. Tofunmi’s boss eventually agreed to work with her and in less than a year, she had mastered the basics, practicalities, and rigours of driving a truck.

In a chat with TheCable Lifestyle, Tofunmi, who is now 26, and with four years of experience on the road, discusses her experiences in a job even men don’t find appealing.

“I started driving this truck when I saw a lady driving it in my area. I liked her courage, so I was inspired by her. Since I have a passion for driving, I decided to try it out. I like driving, I use to play around with Keke Marwa before now,” she said.

“Since I was in the midst of truck drivers because I stayed close to NNPC depot. I told one man, who is now late, that I should start following him so I can learn how to drive a truck.

“He was the one that introduced me to one of his apprentices who was surprised at first because I’m a lady. He told me that if I could be serious, I’d know how to drive in six months. I started following him then.

“Driving the truck was not easy for me when I first started. When I started learning It was difficult for me to pee or defecate openly like the men, so most time I have to wait till the night before I can ease myself If I couldn’t find a public toilet.”

The indigene of Oyo state revealed that the day her heart almost jumped out of her chest was when she had an avoidable accident at Onitsha. Recounting the ugly incident, Tofunmi said she thought she was going to die.

She also narrated another encounter with “touts” in the Mushin part of Lagos during one of her travels at night when her truck broke down.

She said they had demanded her to pay the money she owed them since her wheeler broke down at their turf. 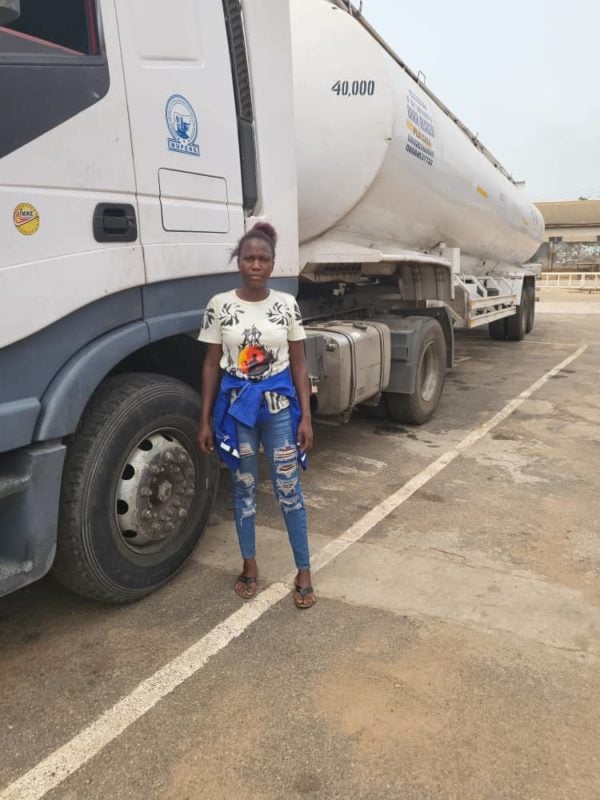 Tofunmi scaled through, but the experience remained with her. She also disclosed that “my scariest experiences happened at the initial stage of my learning…”

“After Onitsha overhead bridge. I can’t remember the year precisely but I have pictures, that was the scariest moment, I thought I was going to die,” she said.

“I wasn’t the one that drove, It was my boss that did. We were carrying AGO to Aba.

“My second scariest day was when our truck broke down at Mushin. I was still fresh in learning, it was in the middle of the night, then the tout came out insisting that we owed them money.

“And my toughest experience was when I started learning how to drive. I wanted to give up because I thought I wouldn’t know how to drive trucks.”

According to her, she has now mastered the corners, holes, and bumps of every road.

“Concerning the bad roads, I have been able to learn how to navigate them, coupled with the fact that if a truck ahead of me can make it safely across the road, I can repeat the same feat,” she said.

She said despite the sense of actualisation she feels when driving the truck, she still gets mocked by some people for a plethora of reasons.

“People mock me almost all the time because of the nature of my job,” she said.

Tofunmi said owing to the dominance of males in the industry she works, most people consider her a “prostitute”.

“They would look down on me, berate my driving skills, and do anything to make me feel inferior,” she said while adding that she remains unperturbed.

“Some call me a prostitute. If I’m not the one driving and they see me next to my boss, they would say I’m his prostitute. Some also make jest of my driving skills. Even if I drive well in their presence, they’d still find fault in it.”

She, however, said she still earns herself cheerleaders from a segment of people who commend her for her driving skills whenever they see her mount on the wheeler with her hands on the steering wheel just the way Vin Diesel does it with exotic cars in the ‘Fast & Furious’ franchise.

“My friends are also proud of me. They salute me when they see me drive. I know they are happy to have me as a friend,” Tofunmi said. 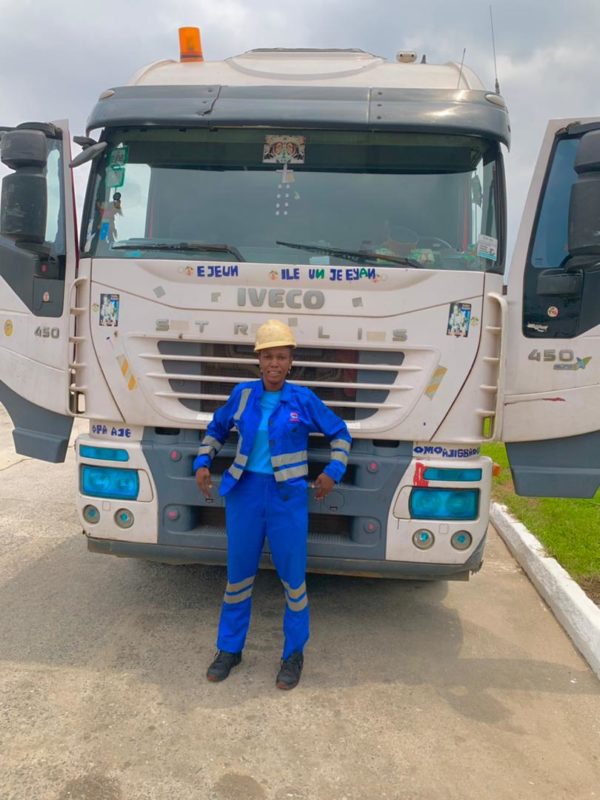 Tofunmi said although she is from a low-class family, she would never engage in any form of uncomely lifestyle to make ends meet.

On whether she is in a relationship, the truck driver said she has a fiancè, who understands the nature of her job and always gives her the necessary support.

She said while growing up, she had always wanted to be a mechanical engineer. But since she started driving the heavy vehicle, she feels 100 percent comfortable with her job.

“I’m an SSCE holder and I wish to further my education. Even if it’s part-time. But now I have a tight schedule,” she said.

Tofunmi also advised young women not to emulate her but to choose an “honourable lifestyle that best fits their personality and through which their skills could be best utilised.”

Lagos is ‘third worst’ city to reside in, says The Economist