SPOTLIGHT: This is Benjamin — the medical student driving tipper

Not everyone is lucky to have been born with a silver spoon. Some people have to struggle through thick and thin to make ends meet, and Chinedum Benjamin falls under this category.

Despite his poor background, Benjamin, a final-year student of medicine and surgery at the University of Nigeria, Nsukka (UNN), has continued to brace the odds.

The medical student juggles several menial jobs to support his education and his family — one of which is driving a tipper.

In this interview, Benjamin tells TheCable Lifestyle about his dreams to become an obstetrician and gynaecologist, experience driving tipper, life’s challenges, and how he has managed to weather the storms.

Tell us a bit about yourself. Can we get to meet you?

I’m from Ebe, Udi local government in Enugu state. I’m currently a final year student of Medicine and Surgery at the University of Nigeria Teaching Hospital (UNTH). I was born into a poor family of six children — 3 boys and 3 girls. I’m the last child. We lived in a place called Pottery at Iva Valley, Enugu.

Can you tell us about your growing up, education, and childhood memories?

My father is now late. He was a bricklayer, while my mother sold bitter leaf. The rest of my siblings also did some part-time work and businesses, not government work. We were helping them because what they were doing although it was enough to feed, but not enough to educate and do some other things. When I was younger, I would help out prepare the vegetables (the bitter leaf).

Sometimes, I would go and sell in a mini-market or follow my father to work to mix cement and sand. There was a stream where tipper drivers would come and load sand and gravel, some times I would go there at the age of 5 or 6 to sell tied water– not sachet water. We’ll get nylon, pour water in it, and put it in the freezer to sell when it was cold.

This continued from when I was around six years till when I was twelve years. In primary five, I decided that I wanted to become a priest. At that time, I was part of the altar boys who used to serve mass. I was in love with the priesthood, hence my decision to become a priest. I also had the second option of becoming a medical doctor. 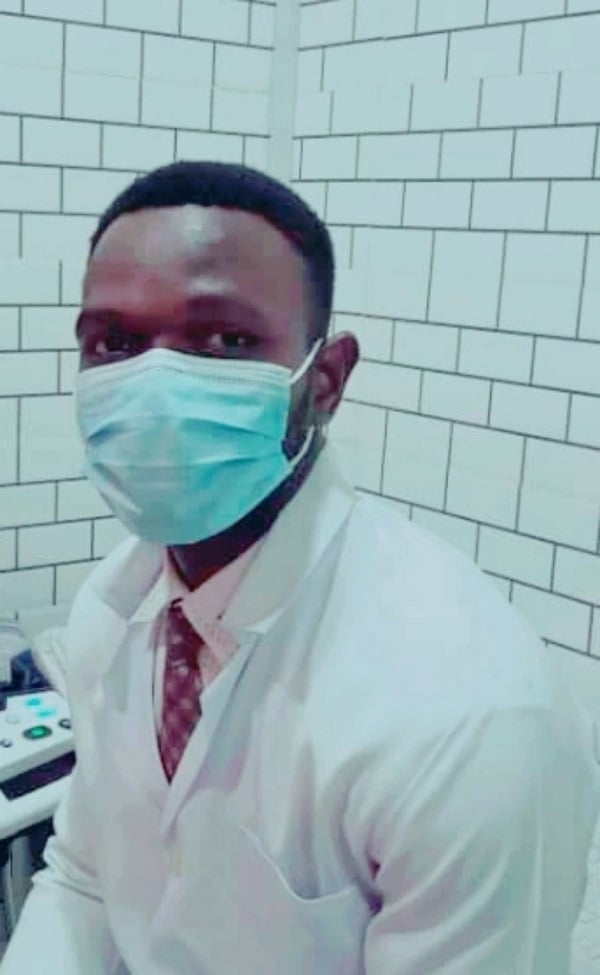 I decided not to go again because I didn’t want my mother to bear the burden alone because I knew it would be expensive for her. So, I returned the form, wrote common entrance exams, and proceeded to secondary school. In secondary school, I had some good friends who helped me out because that area was more like a ghetto.

Why did you decide to study Medicine?

When I was in primary five, there was a time they invited a man to come and talk to us during our morning assembly. The man spoke generally about career paths. He asked those who wanted to be lawyers or doctors to raise their hands. As I said, I wanted to be a priest then but I just thought about what if it didn’t work out?

So, I decided to add up Medicine and Surgery. The reason was that I had known a man in our area, his name is doctor Ugo, he’s also a gynaecologist and he had a private clinic.

I admired the man a lot. We didn’t usually talk but I saw him and knew what he did. I liked that and decided to study medicine, though I thought there was money in the profession as well because nobody wants to study anything and will not make it from it. Later I discovered that there was no money in Medicine. I want to specialise in Obstetrics and Gynaecology. My second choice is a general surgery

I was studying and combining it with work. At some point, I stopped selling the water and joined the boys who filled the tipper with a shovel. I also joined those who would bring out sand from the stream and wash gravel. Even during the school holidays, I would go to the site to work and even help my brother and cousin at building sites. During my junior secondary days, I wasn’t that academically sound because I didn’t read that much, which I picked up during my senior year.

My classmate then in JSS2 who was my very close friend came first and that motivated me to pick up. After passing WAEC, I went back to join my elder brother at the tipper site, at that time he was driving a tipper for someone. Then, I would follow him to work and load the tipper with sand and gravel or debris from a demolished structure. He started teaching me how to drive, from there I started driving back home from the day’s work and then moved to drive a loaded tipper. After about six months, I stopped and went back for JAMB and post-UTME lessons. I sponsored myself from the money I made while working.

I got admission into UNN to further my education. In the second semester of my first year, my mum died. So during school breaks or holidays, I would go back and join my brother to work. However, there was a time I couldn’t go back home continuously because of school work. Then I decided to create awareness online, flyers for the business. If anyone calls me to deliver sand or gravel, I would call my brother and we’ll go together and supply. From there I would go back to school.

How well do you think you’ve been able to combine both without one suffering for the other?

When I started university, my first year was in Nsukka so I had no business going to drive tipper throughout. My first year was completely out of it. Then when I crossed over, I had to mix it up but not during school. I wasn’t a full-time tipper driver, I think that’s the controversy now because most people think a full-time tipper driver cannot do that and still go to school. I believe them because I wouldn’t say it’s not possible but it’s hard.

So, I’m not a full-time tipper driver. In my second year, what I do is that during the break, I go back to work. I follow my brother to work, that’s what I do. I don’t have a tipper that I’m driving completely on my own, as in to-do accounts. For example, during the lockdown in 2020, I went to work with my brother all through. Even during strikes and the period of the Ebola virus too.

I noticed that during my clinical which has to do with more posting to the hospital, there won’t be a break. I had to start doing online flyers just to create awareness. I sent it to my friends on WhatsApp and Facebook, though I didn’t have a Twitter account then. So I sent it to all my social platforms and my friends who saw it, helped me share it.

What would you say has been your biggest challenge so far both as a medical student and a tipper driver?

My biggest challenge so far as a medical student personally to me is finance. From my story, that’s part of the reason I’m involved in other side hustles. It’s not only the tipper I drive, but I also do some other things too.

Not that I’m the one paying my school fees, it’s my brother and my sister and I really feel for them. It should have been my parents doing this but now they are the ones taking that position as my father and mother. It’s not like they have that money to bring out at any point, so I do try to help them.

They also see that commitment too and it encourages them to support me anytime I say I need money. Sometimes, I do feel bad to ask for money for needs that are not pressing. So finance is a major challenge.

Asides from that, medical school is hard. Going for posting, and transportation every day is not easy. The workload to read is much and the time interval to read is short. For example, you’re expected to read Pharmacology and Pathology in a year and pass comfortably. Two courses that some people take years to specialise in.

Has there been any instance when you were embarrassed about being a tipper driver?

Both as a conductor and a tipper driver, I never felt ashamed and I have not been embarrassed. The thing is that the work is a rugged one. Sometimes you remove your shirt, direct tipper, and even stop some cars on the road.

I started this early, so I adapted to that and was very proud of it. I was a clinical student when we went on lockdown in 2020, but I went back to work too. Load tipper, drive, direct, conduct, and was never ashamed or scared of meeting my classmate or lecturer 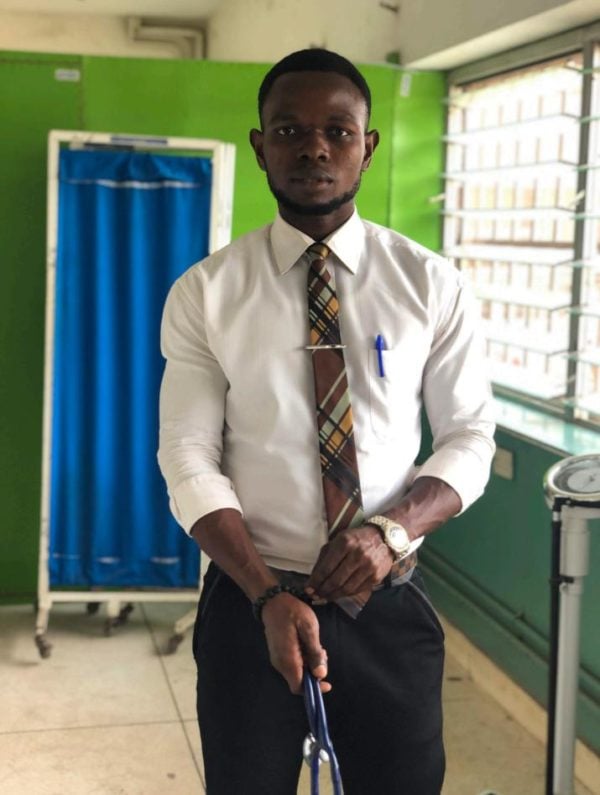 Do you have a future plan to continue with tipper driving or are you looking forward to establishing a much bigger business out of it?

I want to make it a tipper company. That’s a bigger business by God’s grace

Where do you see yourself in the next five years?

Resident doctor in O&G (Obstetrician and Gynaecologist) in Nigeria. Or in the UK or US if I have enough money to write the medical.

Witness testifies R. Kelly sexually abused her ‘hundreds of times’ before she turned 18