Wole Soyinka, an award-winning Nigerian playwright, is set to publish his first novel in 48 years.

The 86-year-old author, who became the first African to win the Nobel prize for literature in 1986, broke the news of his forthcoming book, in a recent statement.

He said the novel titled ‘Chronicles from the Land of the Happiest People in the World’ will debut in Nigeria before the end of 2020 and internationally in early 2021.

The novel comes after ‘Season of Anomy’, his second and most recent novel, which was released in 1973. The author published ‘The Interpreters’, his first novel, in 1965.

“This novel has got everything – friendship and betrayal; faith and treachery; hope and cynicism; murder, mayhem and no shortage of drama, all set against the backdrop of contemporary Nigeria,” The Guardian UK quoted Bookcraft, Soyinka’s publisher, to have said.

“As you would expect from a Soyinka work, it’s got plenty of colourful characters, profound insights, witty commentary, and the most elegant language.” 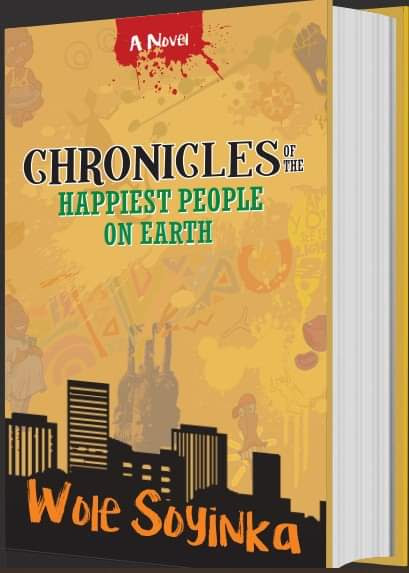 Over the years, Soyinka has had credits for poetry collections, essays, a number of movies, short stories, and plays.

The author also took active roles in Nigeria’s political history and its struggle for independence from Great Britain.

In 1967, during the Nigerian civil war, he was arrested by the federal government of Yakubu Gowon and put in solitary confinement for two years. He has since then been a strong critic of successive Nigerian governments.

Below is the excerpt of Soyinka’s yet to be released book:

It had been a long siege, aided by many of whom the hostage himself had scant or no knowledge but, finally, yes indeed, it was sweet victory to be savoured by the long embattled spouse, Mrs Jaiyesola Badetona. This was the icing on the cake of victory that had already been celebrated in multiple events, all framed devotionally – even down to the sumptuous feasting and souvenirs, grateful offerings by a spouse for a most unexpected upturn in the career of her life partner. That hitherto intransigent spouse, scion of a royal house, had eventually succumbed to her entreaties – and not even grudgingly. On the appointed day, he would observe every schooled detail of his ransom, and with precision. He consented to visit the Apostle, Papa Davina for a spiritual consultation.

Prince Badetona’s elevation, on his own estimation, had been no less than seismic. Thus he had not hesitated to slaughter the fatted cow – he did pride himself after all as a traditionalist, nothing to do with being a scion of a royal house – so, sacrifice was expected, and he was not averse to spreading the fat among friends, colleagues and well-wishers. In any case, he could not fail to have been infected by years of association with the Master Party Soul of his close circle – Duyole Pitan-Payne, engineer and acknowledged leader of their eccentric Gong of Four – but that blithe spirit was in a class all of his own. The prince even conceded a Thanksgiving service – it rid the home of a lingering tension between husband and wife. That feeling of domestic persecution however was product of a series of mishaps, strange happenings over and beyond the elastic limits of coincidence, and of such persistence that even he began to lose confidence and permit chinks in his cynic’s carapace. To make matters worse, such untoward incidents had followed the good news almost like a structured cause-and-effect, commencing so close to his career elevation that he did begin to wonder if there was not indeed a maleficent linkage. Good luck attracting bad, either through some quirky law of Nature’s balance, call it karma, ying-yang or whatever, or simply – as promptly concluded by his wife and extended family – enemy action!

Have you sought divine intercession? At the beginning, he lived up to his name – The Scoffer. He preferred to knuckle down to preparations for the assignment at hand and his new status in life. Money he was prepared to spend for celebrations but balked at the idea of submitting himself to divine busybodies in his earthly failures, successes, both, or absence of any. After all, he had succeeded in keeping divinities at arms’ length throughout a humdrum career – in his view, more accurately described as – lack of spectacular recognition. He preferred it that way. It enabled him to indulge in his favourite hobby, which was simply – problem solving, especial of the statistical kind. He had been, and still remained a reticent mathematical genius. That had its compensations, its material perks. An internal auditor but – with unaudited earnings. He saw no reason to complain or jubilate. It was all – strictly business and, Badetona was genuinely possessed of a retiring temperament. Left to him, he would even have discarded his princely title but, that was now part of his existence, and it also had its advantages.

Jaiyesola however saw it differently. The position lacked public recognition. A prince without a throne – it would not be the turn of his royal line for another century. And then, despite the streak of genius that he had exhibited all the way from schooldays and into public service, in her own parlance – nothing to show for it. She looked at his close circle of associates, some of them members of the prestigious Motor Boat Club of Ikoyi, or the Lagos Island Indigenes Club, Freemasons and Rosicrucians, and felt that Badetona was short-changed in social entitlements. The title of Internal Auditor sounded in her ears like a life sentence in solitary confinement on a diet of garri and water. So she took her case to God, albeit without her husband’s knowledge. Who was to tell her that it was not a wife’s duty to boost her spouse to greater heights?

Then commenced a series of omens. Prayers answered, and in such generous helping, Badetona began to encounter a flurry of mishaps that moved, in her view, beyond mere coincidence. First, his customised computer crashed. That was unprecedented. Next, he stubbed his toe against a protruding table leg – the left toe! – it was one of those ultra- modernistic designs that catered more to sensation than sense. Was it a coincidence that she had terrible dreams that same night? It did not take too long afterwards before the newly appointed Chief Executive Director locked himself out of doors, having left his key wallet in the office. Jaiyeola had also traveled for her Christian pilgrimage, undertaken two weeks after her return from accompanying her Moslem friend to Saudi Arabia for the lesser Hajj – both were followers of the ministry of Papa Davina’s Ekumenika. His phone battery also chose that night to run down – ah yes, the long-distance call from Jaiye in Hebron, with a protracted argument on why she should not fill her suitcase with holy water from River Jordan where her spiritual journey had next directed her feet.

FICTION: When there is no place to hide (15)