Soso Soberekon, the music executive, has threatened to sue Harrysong, the musician, over the claim that he attempted to kill him.

In a recent interview, Harrysong had called out Skiibii, Kcee, and Soberekon.

The singer also said the trio are not his friends as widely assumed.

He further alleged that Soberekon sent people to assassinate him in Port Harcourt, adding that he has evidence.

But reacting in a letter dated October 4, the music executive asked Harrysong to retract his comment immediately and issue an apology to be published in two national newspapers and other online news outlets.

In the letter, signed by Clement Benjamin, his lawyer, Soberekon also demanded the sum of five hundred million naira as “damages and compensation for the malicious publications” against him.

“Our client has informed us that your publication is not only false and without any factual basis but malicious in all material respect. It is by the reckoning of our client, a deliberate attempt sponsored and/or designed to malign his image and cast aspersion on his personality in front of his teeming social media fans and followers and most especially the general public,” the letter reads.

“The intent of your publication is to cast unwarranted, unjustifiable and unsustainable malicious aspersion on our client’s integrity in the eyes of right-thinking members of the public and your medium became a veritable tool for the achievement of this sinister purpose.

“Our client has consequently directed us to request for a retraction of the said publication and an apology to be published in two (2) major newspapers and several online news outlets not later than seven (7) days of the delivery of this letter and also the payment of the sum of N500,000,000.00 (Five Hundred Million Naira) as damages and compensation for the malicious publications made against our client.”

Soberekon vowed to take legal action against the singer if his demands are not met seven days after receipt of the letter.

“Take notice that if you fail to heed the request of our client within seven (7) days of the receipt of this letter, we shall be constrained to proceed to the court of law against you for exemplary damages for injurious falsehood and malicious publication made of and concerning our client,” the letter adds. 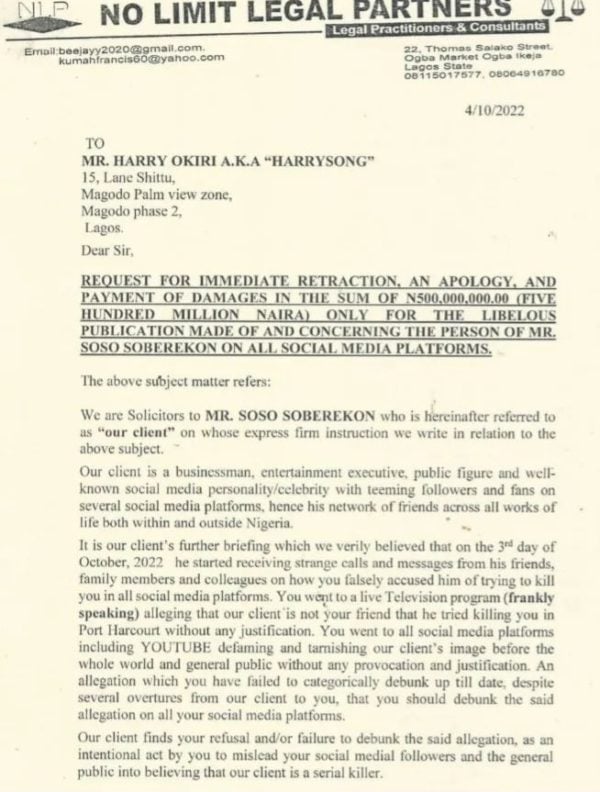 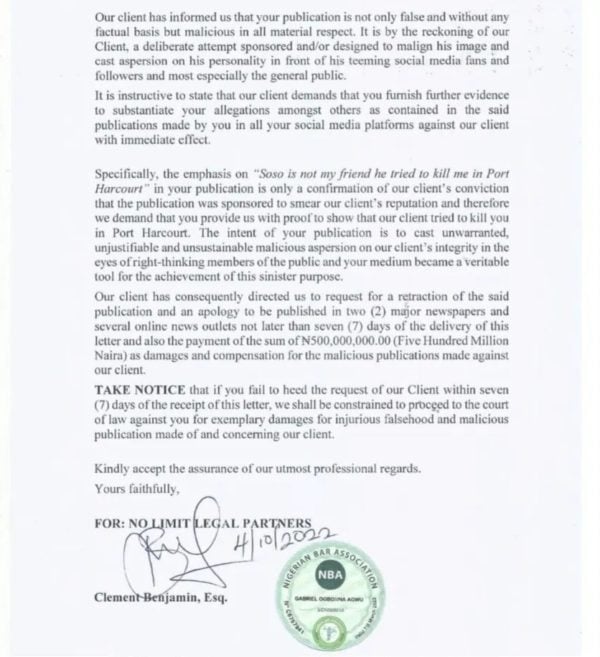