‘I was bleeding’ — Solidstar narrates near-death experience after drug overdose

Joshua Iniyezo, Nigerian singer better known as Solidstar, has narrated how he nearly died from bleeding after overdosing on drugs.

The Delta-born star took to his Insta story on Tuesday to share a post where he recounted how he had overdosed on drugs. He added that the incident, which occurred few days back, led to him bleeding.

The Afropop artiste also apologised to whomever that might have been hurt due to the incident.

“There is a thin line between life and death,” the Afropop artiste wrote. 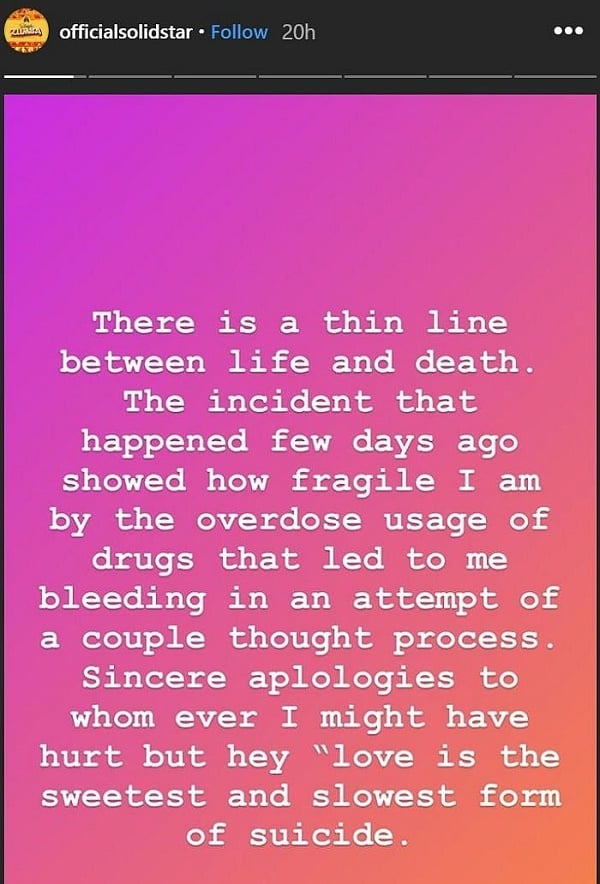 “The incident that happened a few days ago showed how fragile I am by the overdose use of drugs that led to me bleeding in an attempt of a couple thought process. Sincere apologies to whomever i might have hurt ‘but hey love is the sweetest and slowest form of suicide.“

The songwriter, popularly known across Nigeria and Africa for his hit song ‘One in a Million’, went on to write on his Instagram page about the side effects of drug abuse.

Drugs are kind of cool I mean, they are cool before they wreck your skin, your life and your family. That’s when they get uncool. It’s actually a very narrow window of cool.

“Drugs are kind of cool I mean, they are cool before they wreck your skin, your life, and your family. That’s when they get uncool. It’s actually a very narrow window of cool,“ he wrote.

Solidstar’s narration comes more than a week after Angela Okorie, Nollywood actress, recounted how ten bullets were removed from her head after an alleged attack by assassins.

Chynna Rogers, US rapper, dies of drug overdose at 25