Shan George, the actress, has expressed her admiration for Musiliu Akinsanya, the chairman of the Lagos state parks management committee.

In a terse post accompanying the video, the film star described the 47-year-old as a “correct man”.

The actress also said she is crushing on him, adding that she likes “bad boys”. 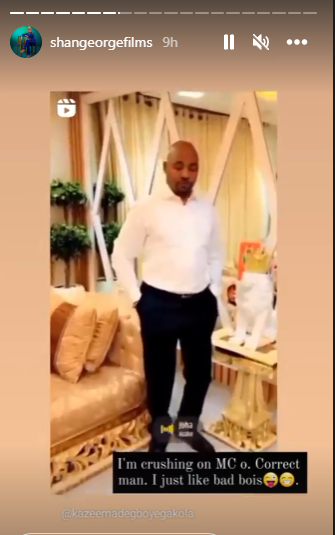 In July, George was in the news after a blog alleged that she and other Nollywood stars had an affair with Apostle Johnson Suleman.

The actress had denied the claim, adding that she had never met the cleric.

She also said she respects Suleman because he “speaks for the downtrodden”.

Her comment about Suleman, however, did not sit well with many people, putting her at the receiving end of an intense backlash.

Halima Abubakar, her colleague, who was also alleged to have had an affair with Suleman, called George a “bloody gossip”.

“Lol Shan Shan, you forget Wetin you tell me right? Omg. No look for my trouble Shan George. I hail you,” she had said.

“Bloody gossip. I drove with you for 12 hours. what was ur topic? A word I didn’t utter. you fall my hand.”

George would later fire back as the pair engaged each other in heated war of words.