Shade Ladipo says she has retrieved gadget gifts like a laptop and iPad from her ex after they broke up.

In a post on her Instastory on Tuesday, the media personality explained why she usually takes back gifts from her partner when the relationship hits the rock.

According to her, she does that most especially in relationships wherein the guy did not spend much on her.

“I just realised that I’m petty AF. I have collected gifts bacccck. Collected Ipad, collected laptop, almost collected phone but because of God,“ she wrote.

“I’m Mrs Petty because guess what, if I collected my gifts back, it means that you didn’t buy as much or more so e mean say na me spend pass.“

Ladipo’s comment comes on the back of rumours that Quavo, American rapper, took back a Bentley car he gifted Saweetie, a songwriter whom he was dating after the duo parted ways over irreconcilable differences. 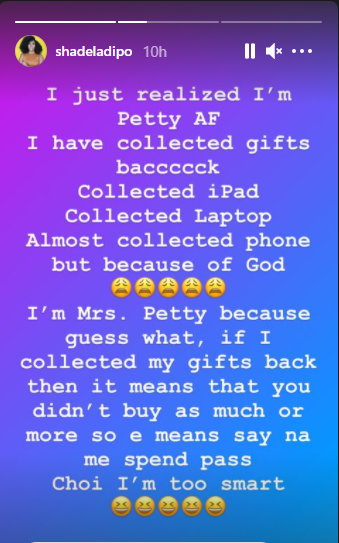 Quavo had tweeted: “You are not the woman I thought you were,” while a subsequent TMZ report debunked the claim.

Ladipo is known for commentaries about issues bordering on marriage, lifestyle, and relationships.

She had earlier stated that it is until lovers undergo the rigours of marriage before they can comprehend some things about divorce.

Recently, she also opened up about her childbirth fears, noting that she need not allow her body to go through the process.

Ladipo was credited as being one of the pioneer staff of UNILAG FM in 2005. She would later work with the United Nations Volunteers Nigeria and advertising agencies for event management, and client services.

Seven interesting things that happen during traditional marriages in Nigeria

How to know if a dying friendship is worth saving