Shade Ladipo, Nigerian media personality, has come under fire over a controversial post wherein she compared the death of Sound Sultan, a rapper; and Obama DMW, an associate to Davido, Afropop singer.

Sound Sultan breathed his last after battling lymphoma — a type of cancer that starts in the white blood cells.

The deceased’s funeral followed shortly after on Sunday at the Marlboro Muslim Cemetry in New Jersey.

Obama DMW, who is fondly called 44 by friends, had earlier passed away after reportedly suffering heart failure.

But while mourning the duo via her Instastory on Monday, Ladipo spoke of the domineering place of fate on life.

She also appeared to have insinuated that one of the late celebrities lived a pleasant life while the other a “violent” life.

“Thinking of the death of 44 & Sultan. The juxtaposition of their lives. You can live a violent life or live the best life but when it’s your time, it’s your time. Rest in peace to heroes and villains. Except for the colonizers,” she wrote. 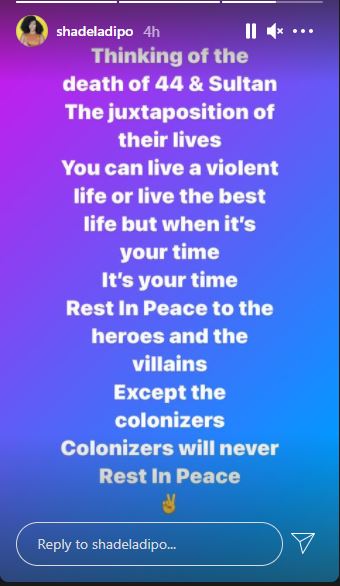 Sound Sultan’s career in show business started in the 90s when he hosted shows to raise money for studio sessions.

He released his hit single ‘Mathematics’ in 2000. After independently releasing other singles and featuring in the hits of other singers, he was signed by Kennis Music.

In turn, Obama DMW, until his death, was the founder of Obama Music Worldwide (OMW), a record label.

He floated ‘Holla At Your Boy’ after his return from Canada but the label collapsed after the death of his partner. The talent manager would later link up with Davido after the label folded up and started pulling the weight of fame.

The media personality has, however, come under criticism on social media for comparing the lives of the duo in her post.

That Shade Ladipo’s post is disgusting. How do you already start dropping such kind of opinion when these men just died ffs

Shade Ladipo is a horrible person🤮

Shade Ladipo talks too much.

Shade Ladipo no get sense… So are most OAPs in Lagos. All vibes no sense

Is shade ladipo normal in the head like this?

Shade Ladipo seems like an insensitive human. Know when to shut up. Can’t really be that difficult. Can it?

I’ll rather be a proud prostitute than suffer with my beauty, says Tacha