Kiitan Bukola, the actress, has taken a swipe at her colleagues for defending Apostle Johnson Suleman, general overseer of the Omega Fire Ministries International.

In the past years, Suleman has been enmeshed in the labyrinth of “sex scandals”.

A fresh allegation emerged last Saturday after a blog claimed the cleric had an affair with a host of Nollywood’s finest actresses including Georgina Onuoha, Queen Nwokoye, Shan George, and Vivian Metchie.

Some of the film stars came out to deny the allegations while also defending Suleman.

Onuoha, while refuting the claims, added that the allegation won’t change her perception of Suleman who she described as a “generous” man.

Nwokoye also denied having sexual intercourse with the cleric. She referred to the cleric as a “good man”.

Reacting to their comments, Bukola slammed her colleagues for speaking highly of the cleric.

She also questioned the essence of putting out rebuttals if Suleman is actually a “good man”.

According to her, the cleric can be good to one person and act differently to another.

“Why is everyone particular about saying he is a good man, he is a good man while debunking. God knows best. One thing I know is someone can be good to you and still be bad to another person,” she wrote. 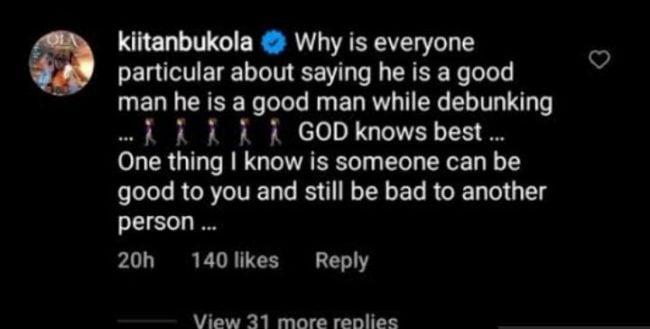 George and Halima Abubakar earlier engaged in a war of words over the alleged sex scandal involving Suleman.

In April 2017, Stephanie Otobo, the Canada-based singer, accused Suleman of having a sexual relationship with her. She also alleged that he got her pregnant and then gave her a concoction to drink to terminate the pregnancy.

But the cleric denied her allegations and took legal action against her. Otobo was later arrested and charged in court.

She subsequently retracted the allegations against Suleman, adding that she was “heavily paid” by powerful politicians and some pastors to blackmail him.

But in a dramatic twist in May, Otobo shared what she claimed was “evidence” against the cleric.

Adunni Ade: Getting pregnant out of wedlock my worst experience in life

DJ Cuppy’s ‘Gelato’ climbs to no. 3 on Apple music chart