Rosy Meurer: I’ll treat Tonto Dikeh’s son like mine if given chance

Rosy Meurer, the Nollywood actress, says she would treat Andre, her husband’s son with Tonto Dikeh, like her own if given the opportunity.

The film star spoke in a Q&A session on her new Instagram stories on Friday.

She also revealed that she could let both boys be friends when her followers quizzed her further.

“Would you treat your step son Andre like your own biological son,” one of her followers asked her, to which she replied: “If Given the opportunity, absolutely.” 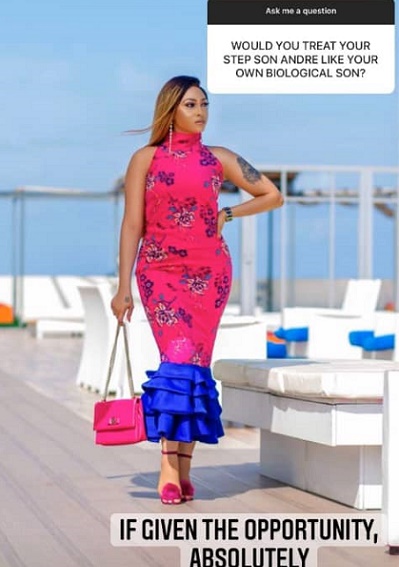 The spotlight had beamed on Meurer in February after Churchill introduced her as his wife on the occasion of her birthday.

Meuer was a personal assistant to Churchill when he was still married to Dikeh. Churchill and Dikeh’s union was blessed with Andre before the duo finalised their divorce in 2017.

Prior to their split, the 35-year-old controversial actress had accused Meurer of having an affair with her husband — a claim she denied at the time.

Meurer was subsequently criticised for marrying Churchill after she had earlier denied being in a relationship with the businessman, whom she normally referred to as a “brother and mentor”.

The Gambian-born actress had said she was not responsible for their divorce, adding that she never dated Churchill when he was married to Dikeh.

On March 9, Meuer and Churchill welcomed the arrival of their first son together.

James Brown: I went to Ikoyi prison to become popular