Rita Dominic, a Nollywood actress, has criticized those who assume that one’s failure to show off their wealth on social media pages means they’re not living happily.

The 44-year-old film star disclosed this in a post on her Instagram story while expressing her displeasure about the culture of seeing expensive lifestyles as a definition of living optimally.

“So social media has become the yardstick to measure wealth? People think because you don’t post designer labels, holidays, and how much you have on your page means you’re not balling,” she wrote.

“Poverty mentality much? Happiness or balling, in your words, means different things to different people. This life isn’t that serious, be happy you are alive and healthy first and foremost!” 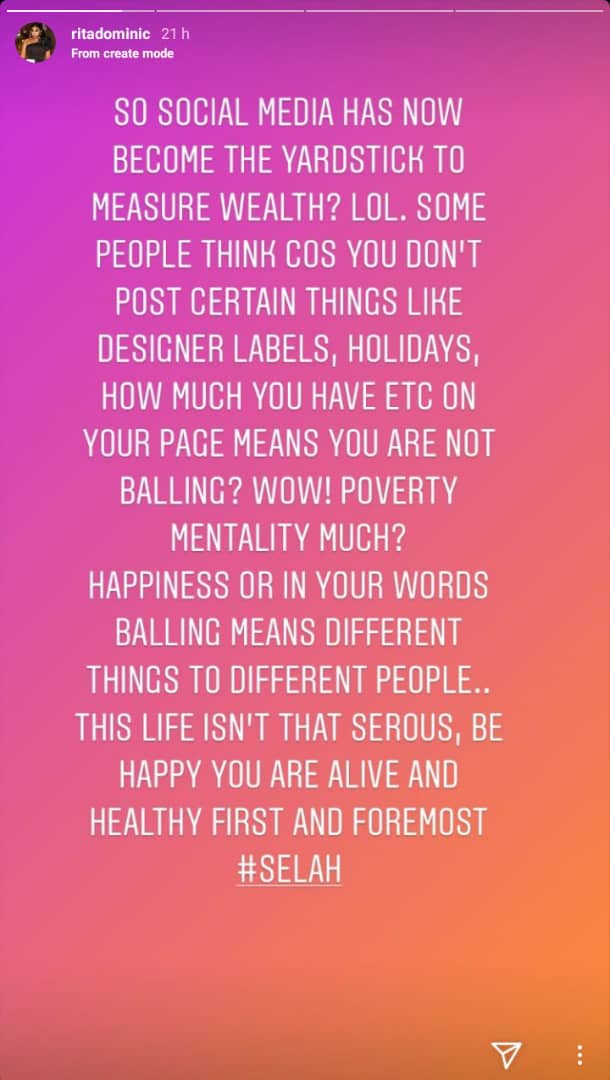 Dominic has, over the course of her acting career, starred in over 100 Nollywood productions, winning the City People Awards as the ‘Most Outstanding Actress’ as far back as 2004.

The movie star had started performing as a child, appearing in school plays and children’s television shows in Imo state.

Dominic has, however, remained private about her relationship life, although she admitted in 2018 that she almost got married at some point in her life.

“I will marry the man of my dreams and not the man society dreams for me. Society feels that there is something wrong with you if you’re a certain age and you’re not married,” she said.

‘We hope it inspires others’ — FG hails Wizkid, Burna Boy over Grammy win

Lil Wayne: How I attempted suicide at 12