Ten weeks ago, Rema, the Mavin Records artiste, commended Brisk Capital, an investment firm whose managing director has been arrested for allegedly diverting over N2 billion.

Operatives of the police special fraud unit (PSFU) in Lagos had arrested Dominic Joshua after they were petitioned by investors.

Joshua was alleged to have lured victims via social media and publications where he claimed to be a financial investor who manages funds for individuals and companies.

It was said that his victims were encouraged to invest in bitcoin, forex trading, real estate, and oil & gas for a 60 percent monthly return on investment (ROI), plus a guarantee of the invested principal.

Following his arrest, a Twitter post made via Rema’s official handle on March 11 gained attention. In the post, the singer shared a photo showing wads of naira notes he described as his ROI from Brisk Capital.

“Hustle Thursday, ROI from my investment with @briskcapitalLTD just came in, nice one my gees!” Rema wrote in the now-deleted tweet. 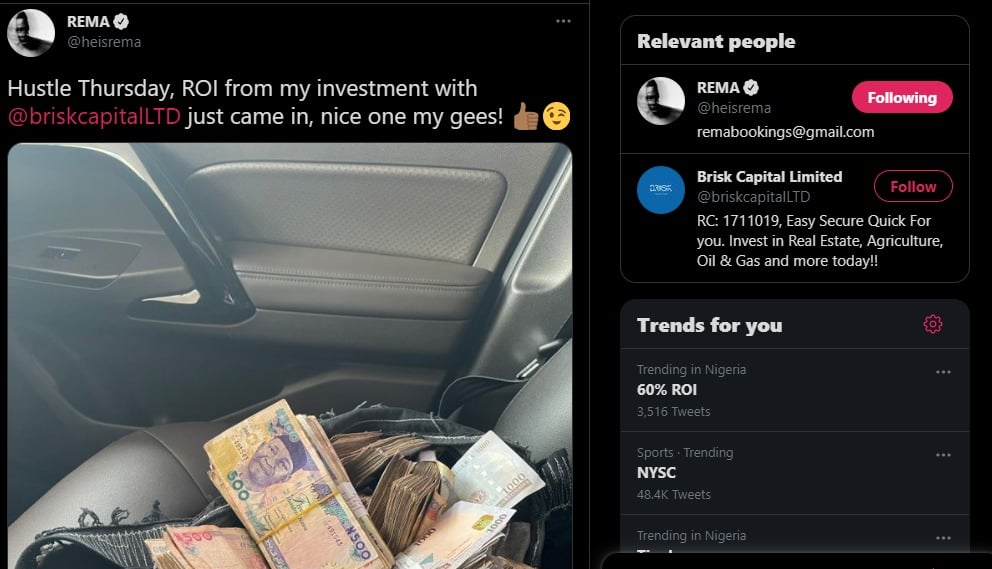 The PSPU, while addressing Joshua’s case, said funds belonging to over 500 investors were diverted by the firm to sponsor an extravagant lifestyle, parties, cars, luxury watches, and real estates in Abuja, Lagos, and Port-Harcourt.

“The suspect confessed to the crime but pleaded to be given time to return the monies,” the police unit explained.

“Some of the items purchased with the diverted funds have been recovered as exhibits. The suspects will be charged to the Federal High Court as soon as the strike by the Judiciary Staff Union of Nigeria (JUSUN) is called off.

“The commissioner of police in charge of the unit, CP. Anderson A. Bankole advised the public to be wary of investment/portfolio managers that suspiciously promised very high returns.”

Jaiye Kuti: How TB Joshua’s spirit visited me after his death

SPOTLIGHT: If not for Nollywood, I’d be an importer and exporter, says ‘Alter Ego’ actor