Real Warri Pikin: How I nearly killed myself in 2018 over N22m debt

Anita Asuoha, Nigerian comedienne better known as Real Warri Pikin, has revealed how she almost took her own life in 2018 due to a debt of N22 million.

Anita said at the time, she was overwhelmed with thoughts of how to repay a debt of N22 million alongside Ikechukwu Asuoha, her husband.

The comedienne also explained that as help was not forthcoming at the time, she gave in to the suicidal thoughts and tried killing herself.

“On the 6th of June 2018, the only words I was hearing in my head was…end it now! Give up already! No hope! You and Ikechukwu will never pay up the N22 million debt!” she wrote.

“The suffering will never end! End it! End it! You will beg all the days of your life! Help will never come! Rent, school fees, bills are due you can’t pay!

“You and Ikechukwu salary put together in five years can’t pay back the debt, end it! The banks, Friends etc you owe won’t stop calling and embarrassing you End it! The shame and pain is too much and it will get worse. End it! End it Now! God will Never come true for you!

“And because I was excusted I believed the voice in my head I made an attempt to take my own life (Dear God, Thank you for giving me a second chance).” 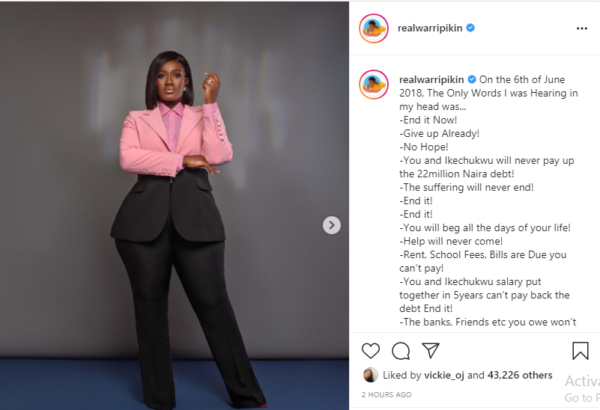 The comedienne said unknown to her then, God was only preparing her for the blessing that was about to unfold.

She enjoined people not to resort to suicide when it appears things are not going as planned, adding that they should also prioritise their mental health.

“Little did I know that my breakthrough was Near and God was just preparing me for where e was taking me…,” she added.

“Say no to suicide, build capacity, nobody owes you anything, take calculated risk, balance your circle, always check on your mental health, don’t be hard on you.”

Chico Ejiro to be buried Feb 20