Rahama Sadau, the Nigerian actress, says she is not part of the Bola Tinubu/Kashim Shettima women’s campaign team for the 2023 general election.

On Saturday, the All Progressives Congress (APC) unveiled a women’s campaign team list for Tinubu, the party’s presidential candidate.

The list includes a creative and entertainment industry committee, headed by Joke Silva, the movie star.

But reacting via her Twitter page, the Kannywood star denied being part of Tinubu/Shettima’s campaign train.

Sadau said she was never consulted before her name was added to the list.

The actress also wondered how her name was included in the list without her permission.

“This is a big fat lieeeee… I am not aware of this… I don’t know how my name made it to this list, not in any way associated with this,” she wrote.

THIS IS A BIG FAT LIEEEEE…. I AM NOT AWARE OF THIS … ❌ 😤
I DON’T KNOW HOW MY NAME MADE IT TO THIS LIST, NOT IN ANY WAY ASSOCIATED WITH THIS. ‼️❌😡😡 https://t.co/VSxwieQMNF 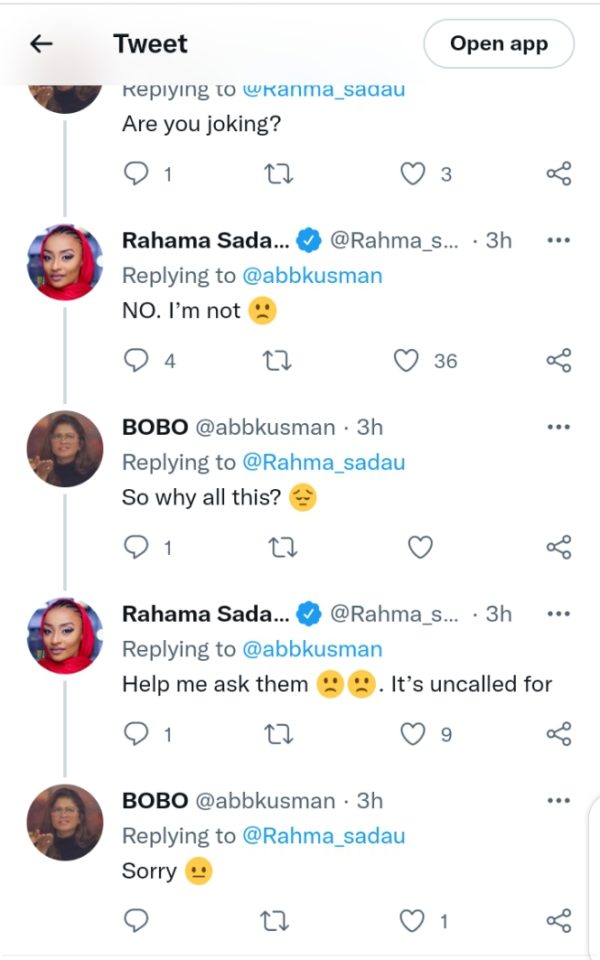 The APC has not reacted to her tweet — as of the time of this report.

Tinubu is one of the leading candidates for the 2023 presidential election alongside Atiku Abubakar of the Peoples Democratic Party (PDP), and Peter Obi of the Labour Party (LP).