Students of the Obafemi Awolowo University (OAU) in Ile Ife on Friday staged a protest over the death of Omowumi Aisat Adesina, their final-year colleague.

The students blocked the Ife-Ibadan expressway and the Osogbo-Ede road, thereby obstructing the flow of traffic, as they accused the varsity authorities of negligence in the death of the student of foreign languages department.

The deceased lady was said to have passed away at Seventh Day Adventist Hospital, Ile-Ife, where she was referred to by OAU’s health centre.

One of the protesters, who spoke to TheCable Lifestyle, said Adesina visited the school’s clinic to seek treatment for her ulcer.

The source claimed that the clinic officials had delayed her treatment and, at some point, prescribed “the wrong drugs”.

“She died due to the negligence of health centre staff on our campus. Her case is not the first of its kind but this one caused widespread rage among the students. Most times, patients are not being taken care of,” the student said.

“Other times, you are given substandard drugs. We can no longer tolerate it. What caused her death was that she was given drugs we feel weren’t correct. Her friend recommended that she be admitted but she wasn’t.

“It was sad when we heard she had passed away. She had an ulcer and some other issues, not that she died at the health centre. We’ve been protesting since Thursday night, into Friday. We’ll be having a candle night procession.”

When contacted, Abiodun Olarewaju, OAU’s spokesperson, did not respond to the allegations of negligence.

But in a statement, the PRO instead appealed to the students to remain calm while commiserating with the family of the deceased.

“The management of OAU, Ile Ife, regrets to announce the death of one of our students, Adesina Omowumi Aisat, a 24-year-old, female student of the department of foreign languages,” the statement read.

“The student reported to the Health Centre on Tuesday, 28th September 2021 with signs and symptoms of a severe infection. She was promptly treated with some drugs prescribed and asked to report back as an outpatient.

“Adesina reported back to the health centre on the morning of Thursday, September 30, 2021. Upon examination, she was referred to the Seventh Day Adventist Hospital for further management where she regrettably died.

“The management sympathises with the parents, friends, colleagues and the entire students of the university.

“The management will like to appeal to all students of the university to remain calm and kindly refrain from any act that can jeopardise the peace on campus and truncate the ongoing rain semester examinations.”

See photos of the protesting students below: 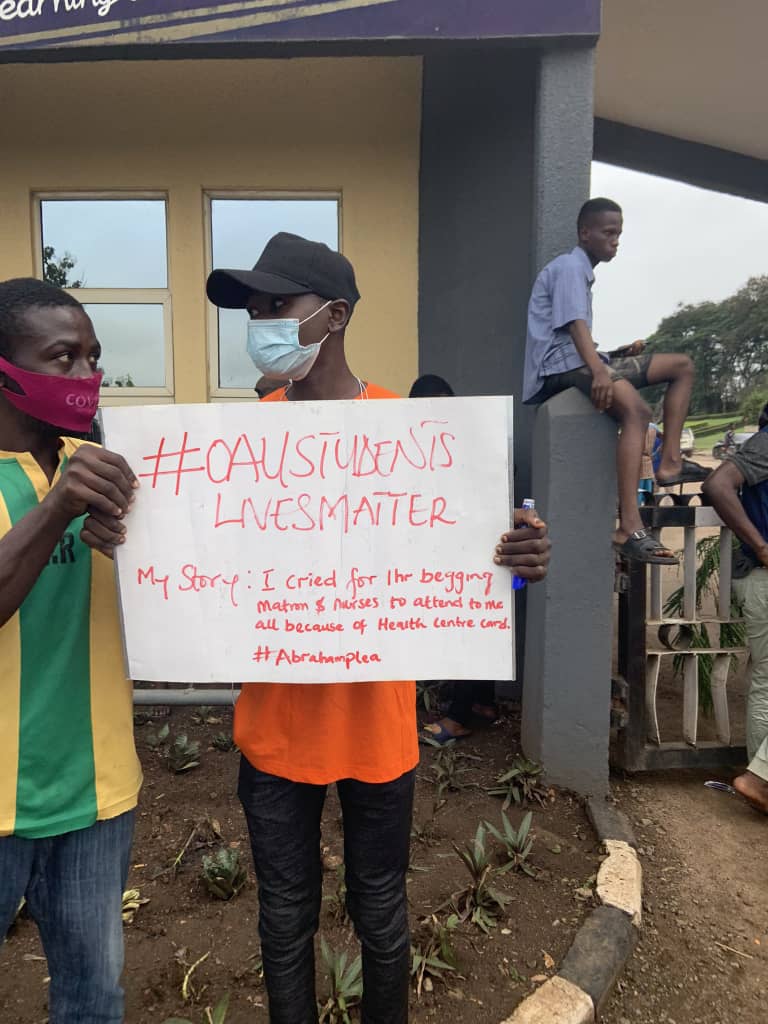 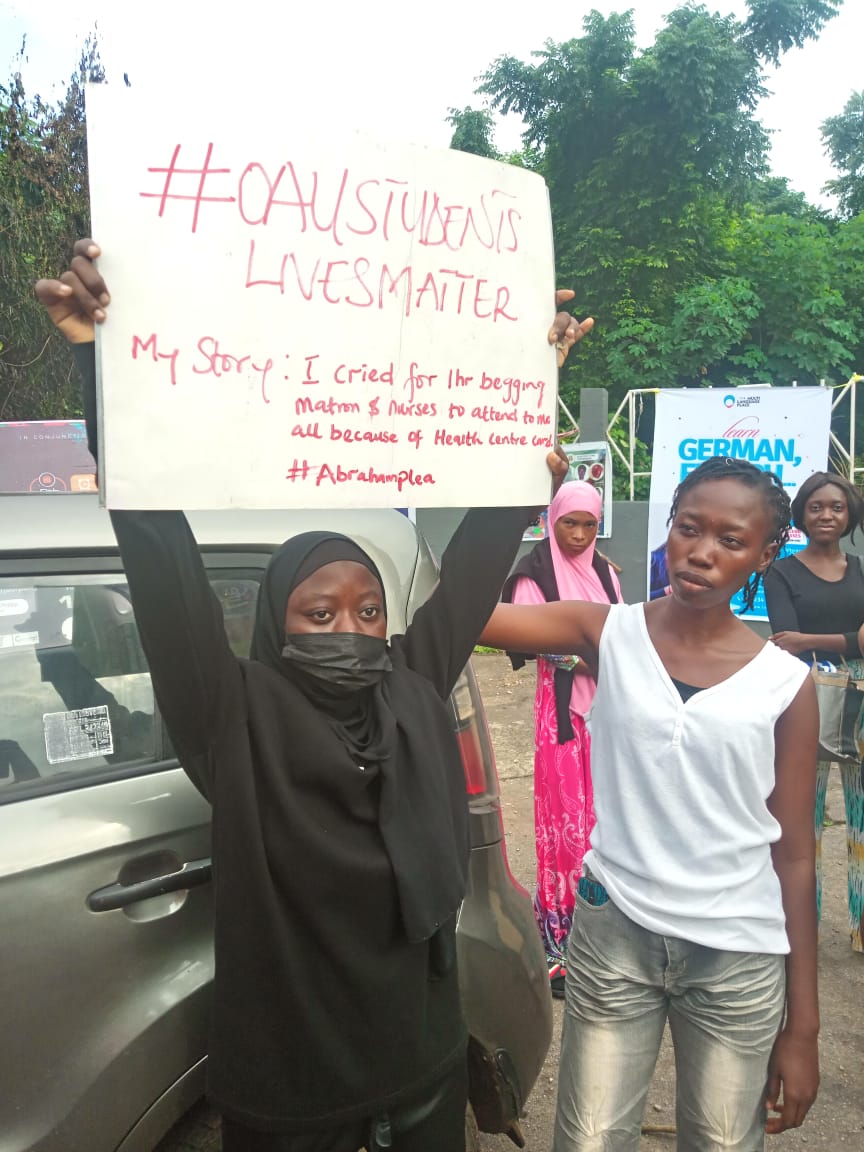 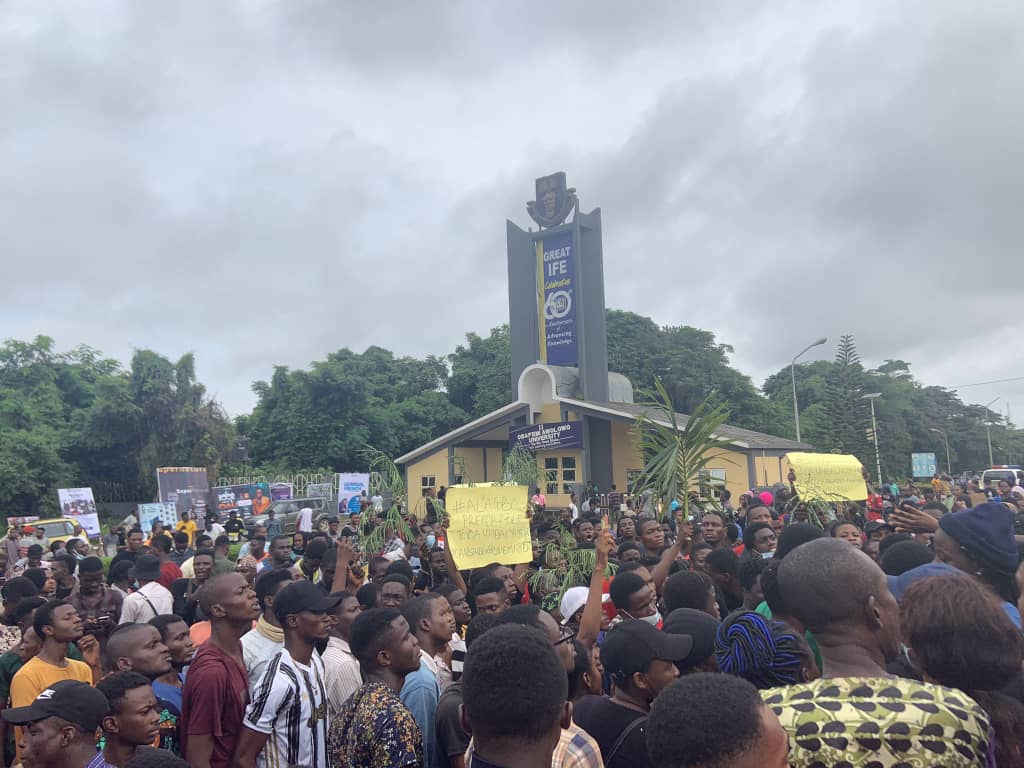 Two UNILAG graduating students reveal how they got ‘perfect’ 5.0 CGPA

No more ‘noodles’ and other new Babcock University rules