Pelu Awofeso, the Nigerian travel journalist, is set to produce a documentary on the exploits of Samuel Ajayi Crowther, the late bishop and Yoruba linguist.

Crowther, a Sierra Leonean-Nigerian clergy, was celebrated as the first African Anglican bishop of West Africa.

The documentary will feature a six-man tour of 20 locations within the space of 10 weeks.

Some of the cities to be toured for the project double as the places where the late bishop had visited in his lifetime.

In his lifetime, Crowther was selected to accompany the missionary James Schön on the Niger expedition of 1841.

Together with Schön, he was expected to learn Hausa for use on the expedition. The goal of the tour was to stimulate commerce, teach agricultural techniques, encourage Christianity, and help end the slave trade.

Crowther was later recalled to England, where he was trained as a minister and ordained by the Bishop of London.

Schön wrote to the Church Missionary Society, noting Crowther’s usefulness and ability on the expedition.

Crowther returned to Africa in 1843 and, with Henry Townsend, opened a mission in Abeokuta, Ogun state.

He began translating the Bible into Yoruba and compiling a dictionary in the same language.

In 1843, his grammar book, on which he had begun working during the Niger expedition, was published.

A Yoruba version of the Anglican Book of Common Prayer followed later. Crowther also compiled a vocabulary of the Yoruba language, including a large number of local proverbs, published in London in 1852. 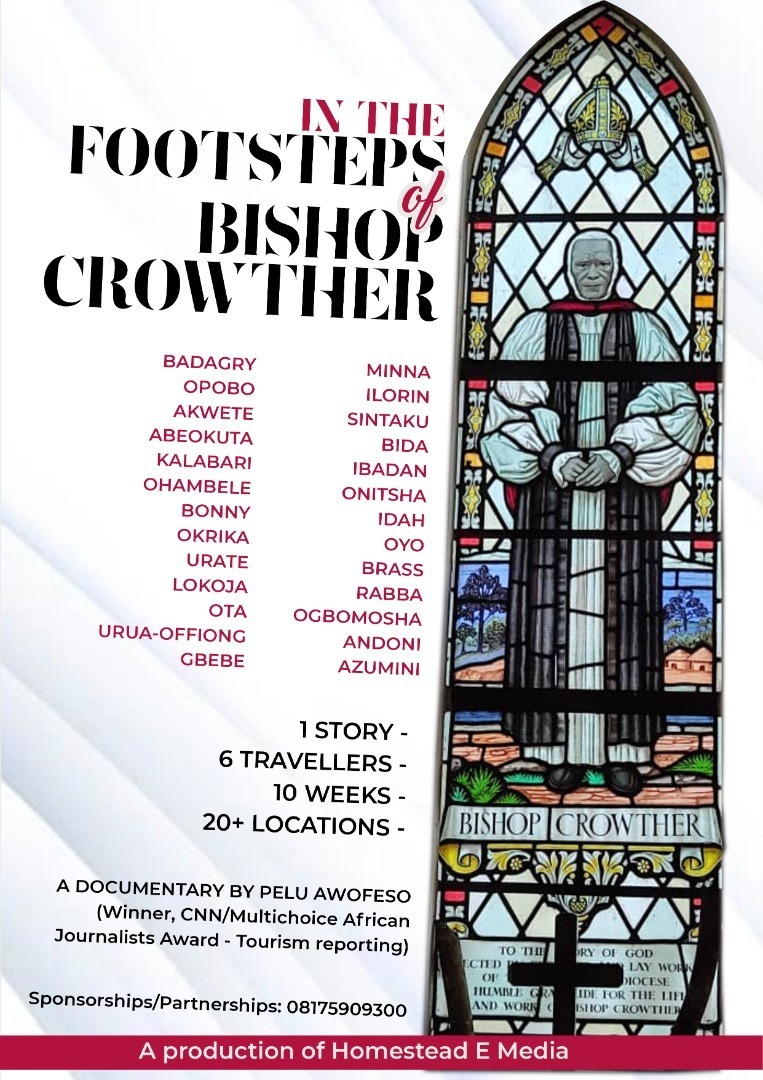 He began codifying other languages. Following the British Niger expeditions of 1854 and 1857, Crowther, assisted by a young Igbo interpreter named Simon Jonas, produced a primer for the Igbo language in 1857.

He published one for the Nupe language in 1860, and a full grammar and vocabulary of Nupe in 1864.

Crowther died of a stroke in Lagos in December 1891 aged 82. He was buried at Ajele cemetery in Lagos.

Speaking to TheCable Lifestyle about his documentary, Awofeso said: “This year happens to be a milestone year for the late bishop. It’ll be his 130 years death anniversary by December 31, 2021.

“This year makes it his 200th since his capture as a slave. More than that, there’s so much more about Bishop Ajayi Crowder beyond the fact that he translated the Bible into Yoruba in Badagry when doing that took decades.

“He traveled widely in the lower half of Nigeria, with many landmarks name after him. Bonny Island is where his memory is well preserved. That was where he started his life when he was consecrated Bishop in 1864.

“He built a church which is now a cathedral. There’s a chapel where his memory is preserved. Many don’t know these things. He wasn’t just about preaching and church. He was also about labour and hard work.

“In the 1880s, he lived in Lokoja, somewhere called Gbebe across the River Niger where he built a mission house. He did a lot of commerce, oversaw the cotton making. The landmarks are all over the place. It makes a nice story.”

Awofeso said he plans to start filming in November and round off by April 2022.

“I feel that, as a Nigerian who has covered culture, history, and heritage for a long time, the documentary makes for a very good opportunity to bring up the essential details about Bishop Crowther,” the journalist added.

“It’s to appreciate one of our own who toiled in an era when there were no trains, planes, and automobiles. They were trekking, using canoes and ferries.

“What I want to do is a documentary following in his footsteps. We have identified about 20-something places where he is recorded to have visited. I’ll be traveling with a team of filmmakers to all these places.

“We’ll be identifying the landmarks that remain today and talk to multiple people in the Anglican church, the community people to hear what they remember of him. The impact he has made, how much is still remaining?

“I can bet that the Anglican Church in London and Canterbury would do something about the man as they don’t joke with records. He comes from Osogun in Oyo. Is Oyo state interested in his story? No.

“Nigeria is a country of 100 million Christians. It’s already a pilgrimage destination but sometimes we focus on the current level of Nigerians. With this project, we’re also trying to carve out religious tourism in Nigeria.

“We’re crowdfunding for the documentary; a campaign will be launched on Monday, which is World Tourism Day. We’ll start raising money from the 27th of September to the 27th of October. We’ll start putting our plans in place.”

Let Karma, The Upside… 10 movies you can see this weekend

‘Gone with the Wind’ removed from HBO Max over ‘racist depictions’