Anita Isama, the estranged wife of Paul Okoye, reportedly filed for a divorce from the singer over alleged infidelity, a viral document has claimed.

Anita’s marriage to Paul, also known as Rudeboy, has been in the public eye since August last year when a document believed to be a divorce petition filed by her surfaced online.

At the time, the document had cited “irreconcilable difference” as her reason for pushing for a divorce.

Although the couple are yet to react to the document, another document surfaced on Friday indicating the reasons for Anita’s alleged push for a divorce.

In the now-viral petition, said to have been filed before the federal high court in Abuja, Anita had claimed Paul threw her out of their house on June 11, 2020 after she discovered he was having an affair with a maid identified as Florence. 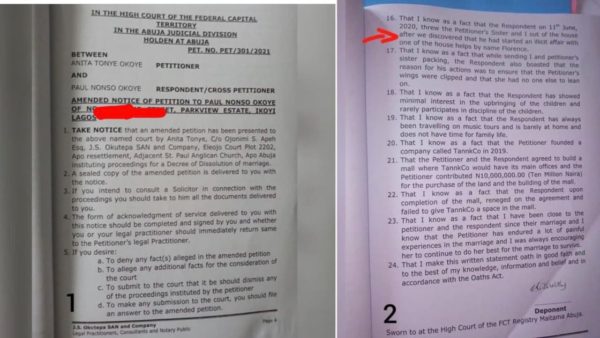 “That I know as a fact that the respondent on 11th June, 2020, threw the petitioner’s Sister and I out of the house after we discovered that he had started an illicit affair with one of the house helps by name Florence,” the document, said to have been deposed to by someone close to Anita, read.

“That I know as a fact that while sending I and petitioner’s sister packing, the respondent also boasted that the reason for his actions was to ensure that the petitioner’s wings were clipped and that she had no one else to lean on.”

In the petition, the entrepreneur also accused the musician of being irresponsible to the family, particularly their children.

“That I know as a fact that the Respondent has shown minimal interest in the upbringing of the children and rarely participates in discipline of the children,” it added.

“That I know as a fact that the Respondent has always been travelling on music tours and is barely at home and does not have time for family life.”

The document further claimed Anita’s push for divorce was also informed by Paul’s failure to honour a business deal between them.

It alleged Anita gave her husband the sum of ten million naira and they had an agreement that she would be granted a portion of land at TannkCo, his company’s premises to build a mall.

It, however, alleged that Paul failed to honour the agreement after he collected the money.

Like in 2021, the couple are yet to address the viral document.

Checks on Anita’s Instagram page by TheCable Lifestyle also showed that she is still bearing Okoye as her surname.

Anita and Paul met in 2004 at the University of Abuja. In 2013, their son Andre was born in Atlanta, Georgia in the United States.

The couple later had a set of twins who were delivered in Atlanta.

‘I was raped, drugged and held captive for days’ — Duffy breaks silence on hiatus from spotlight