Paul Okoye, a Nigerian singer, has tackled Davido, fellow music star, for “insulting” those who attended his birthday and that of Peter Okoye, his twin brother, separately.

The identical twins and former member of Psquare, a now-defunct musical group, marked their 39th birthday on Wednesday.

But on Friday, the ‘OBO’ crooner wondered why people would choose to attend the individual birthday party of the duo who parted ways in 2016.

“Y’all niggas that went to Peter and Paul’s bday separately y’all pu**y as f*ck!! Them n***as is twins!! Not my business but s**t hurts I’m angry Walai,” he had written on Twitter.

Y’all niggas that wen to Peter and Paul’s bday separately y’all pussy as fuck!! Them niggas is TWINS !! Not my business but Shit hurts I’m angry Walai

Davido’s post did not go down well with Paul, who took to his Instagram stories to question the ‘FEM’ crooner’s rationality for insulting his family and friends.

The singer, who is also known as Rudeboy, expressed his dissapointment with Davido, stating that he respected the decision of family and friends to attend his birthday as well as that of his twin brother.

“On what level and audacity do you have to call my friends p***y….bro has it come to this? I am highly disappointed with you,” he wrote.

“You don’t have the right to insult my family and friends. For your information….90% of those that came to mine still went to his…same the other way round and I respect their decision.” 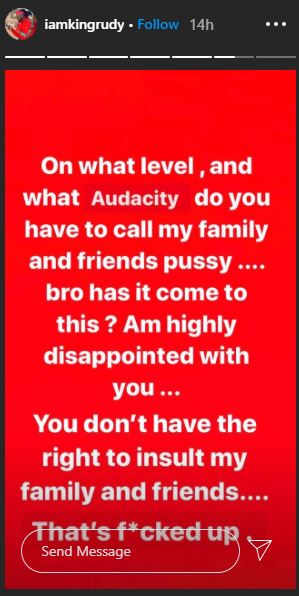 The development comes after Paul and Peter’s wife engaged in a heated exchange over Lola’s birthday message bordering on the lingering Psquare feud.

The duo had severed ties in 2016 to pursue their personal ambitions and solo careers after a disagreement on the role of Jude Okoye, their older brother and immediate past manager.