Peter Okoye, a Nigerian singer better known as Mr P, and Peter Osaze Odemwingie, ex-Super Eagles player, have apologised to each other over their recent spat on Instagram.

Osaze had chided the music star on Tuesday for sharing a video of a dance challenge that involves people breaking bottles on their heads to his fans. He had also accused him of “robbing people in broad daylight” with his business.

Okoye, who didn’t take the rebuke lightly, took to his Instagram story to say that the football star’s comments were indicative that he is “sick and needs help.”

Realising his comments had offended the singer, Osaze shared a video on the social media platform wherein he apologised to Okoye for judging and condemning his business.

“My bro, I didn’t mean no offense, to be honest, but you know we are brothers… As you offered to pray for me, feeling like things no dey alright for me, I thought I’ll do the favour back because what you sow is what you reap. So you pray for me and I pray for you… You were my favourite singer of all time, and you will remain my favourite,” he said.

He went on to explain that the reason he earlier condemned Okoye’s business was because he doesn’t support gambling.

He also advised that gambling should be discouraged because it is an addiction which makes people steal, borrow, and get into debt.

“When I watched the video about the guy that took his mum’s last N500 to gamble, basically what you are doing is encouraging gambling. Some people win and some lose. He went into tears saying his mother is ill, she has cancer and she is on chemotherapy. He said you asked him why he is crying and he said he took his mum’s money from her account, her last N500 to buy the ticket,” Osaze said.

“Luckily he won but I believe there are some guys who didn’t win on that day and possibly took their dad’s or mum’s or friends last money because they believed they will win. So in that situation, I think you should have said to him that he is lucky today, but don’t do that again because if he didn’t win that means they might not have a meal that day or next. And I believe some people borrow money to do this thing and when they are in debt they end up arrested, beaten up and all that, so that was my worry really.

“In 2019, I was offered endorsement deals from gambling companies that were launching in Nigeria. I went to God with it…but my conscience didn’t let me do that in Nigeria, because our people don’t have money, they will go gamble their last money on Arsenal, Chelsea. What next, they go home beat their wife slap their kids after being disappointed. So I said no.”

On his part, the singer also took to his Instastory to apologise to Osaze for insulting him. 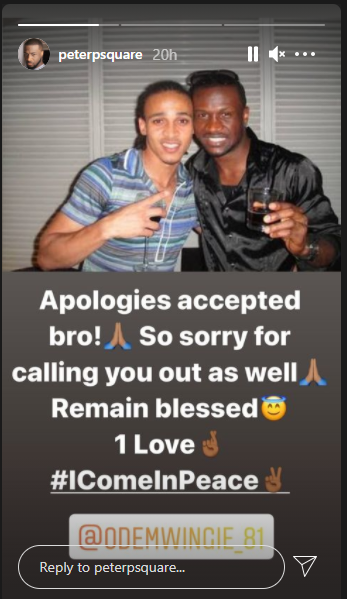 “Apologies accepted bro. So sorry for calling you out as well. Remain blessed,” he wrote.

#EndSARS: We either voice out now or risk being killed by insecurity, says DJ Switch

‘Heaven finally got its weatherman’ — tributes pour in for Majek Fashek

Adunni Ade: Getting pregnant out of wedlock my worst experience in life