Omoni Oboli: I will hunt down anyone who falsely accuses my sons of rape

Omoni Oboli, an actress and film director, says she would hunt down anyone who falsely accuses her sons of rape.

The outgoing year has witnessed a rise in allegations of sexual assault on social media.

TheCable Lifestyle had earlier reported how D’banj, a singer, was accused of rape by Seyitan Babatayo, a Nigerian lady, but was later cleared of the allegation.

Justin UG, a Nigeria-born American entertainer, was recently called out on Twitter over an allegation of statutory rape — a claim he denied.

In a post on her Instagram story, Oboli said false rape accusations are just as deadly as rape.

The movie star appealed to anyone who indulges in falsely accusing people of rape to steer clear of her three boys.

Oboli said she had consistently taught her children and other men that consent is key during sex.

Oboli, however, said she would not accommodate the practice of people falsely accusing others of rape, adding that she would go after anyone who tries such with her children. 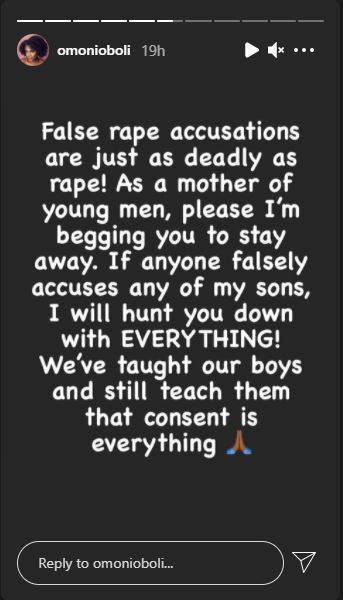 “False rape accusations are just as deadly as rape! As a mother of young men, please I’m begging you to stay away,” she wrote.

“If anyone falsely accuses any of my sons, I will hunt you down with EVERYTHING! We’ve taught our boys and still teach them that consent is everything.”

May D treated for burns after house fire