Ace comedian, Okey Bakassi, has revealed that some supposedly rich Nigerians do not pay for comedy services rendered to them.

Bakassi made this known in the latest episode of The Gist with Emma Ugolee, which aired Saturday on Hip TV.

The comedian and another veteran, Atunyota Alleluya Akporobomerere, popularly known as Ali Baba, were guests on the show.

“Some big men don’t pay. Some people have like four grown up children and they are still owing me from their wedding. Sometimes, when I run into them at events, they are the first to greet,” said Bakassi.

Speaking further on the challenges faced by both men during the formative years of the Nigerian comedy industry, Bakassi said there was a time when comedians were not considered by events organisers.

He said: “It’s somebody who has used the services of one comedian before that often recommends the need for a comedian.

The comedian/actor noted that at the time, comedians were desperate for opportunities to show their skills, regardless of the pay.

“Initially, we were begging to serve,” Bakassi added.

He continued: “But when we had convincingly shown them that your event needs us because there are bound to be that moment when there would be nothing happening.

“When we had created that hunger for what we do, it gave us the impetus to charge for more. In those days, they would bring the so-called professional MCs and then bring comedians as fillers.”

He also questioned the work ethics of upcoming comedians, some of whom he says are in the habit of “photocopying” jokes.

While on the show, Bakassi said young comedians don’t work hard enough, but he would subsequently take to social media to expatiate on the point.

Writing on his Instagram page, he said, “Whereas some young comedians have brought fresh energy into the game, there are lots of “lazy acts” who just sit and photocopy other people’s efforts, in search of relevance and social media followership.

“Those who are original and work hard will always excel.”

Bakassi gave special mention to Folarin ‘Falz’ Falana, an actor/singer/comic, whom he described as “one of the hardest working acts of his time”.

The veteran comedian expressed admiration for the entertainer and noted that he’s a fan. 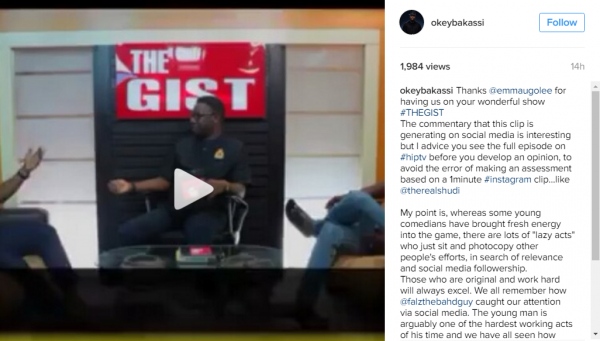