Uyaiedu Ikpe-Etim, lesbian sister of Nse Ikpe-Etim, the Nollywood actress, has narrated how she endured an allegedly abusive relationship with Amara, her ex-girlfriend.

In a series of posts via her Instagram stories on Monday, Uyaiedu said their relationship started in 2019. She said the pair got along very well at the beginning.

The film director added that their love story, however, took a dramatic twist when she noticed Amara started displaying violent behaviours.

According to Uyaiedu, the queer rights activist, better known as Amara the lesbian, often screamed at her at the slightest of provocation including during sex.

The 33-year-old said she had kept mute on the issue for long but decided to open up so people would hear her own side of the story.

She also claimed that during their time together, Amara was always condemning her affair with Yinka, another lesbian she linked her up with.

“In the spirit of the New Year, I’ll be talking about how Amara abused me and all our friends the entire time we were in a relationship. I wanted to be silent but this babe has made one million videos about it and is calling it her ‘lived experience’,” she wrote in the now-deleted post.

‘In what world do you abuse a person for months and then feel justified in sharing that story? Done being silent and all of you that have been enabling this abuser need to know who she truly is.

“The relationship was great until I started to notice how Amara would scream at the slightest provocation. When we first started dating, Yinka would always wait for Amara before eating.

“Amara brought me and Yinka together and was always down for threesomes. During the act, Amara would get uncomfortable and start screaming at us. She would accuse Yinka of saving all her energy for me.”

Uyaiedu said she had managed to put up with Amara’s attitudes, adding that the LGBT activist usually plead with her not to quit the relationship whenever she declares her intention to do so.

The filmmaker recalled how Amara broke down in tears when she told her that she was quiting the relationship after she slapped her.

“I remember when she slapped me that night. I called my best friend crying. My best friend begged me to leave. That night I told Amara I was leaving. Amara broke down crying,” she added.

“She said her father chained her and all she knows is violence and trauma. She told me she’s chased everyone away and begged me not to leave her. You guys, I loved that babe and every time she abused me, somehow I still managed to see a scared little girl.”

Amara is yet to react to Uyaiedu’s claim as of the time of this report.

Uyaiedu was in the public eye in 2020 after she produced ‘Ife‘, Nigeria’s first lesbian movie, alongside Pamela Adie.

Below are a few screenshots of her claim: 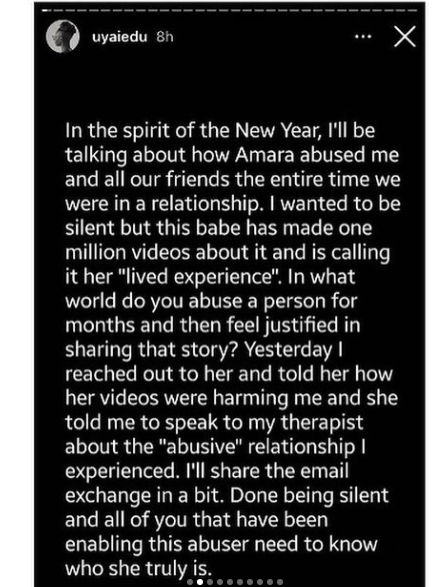 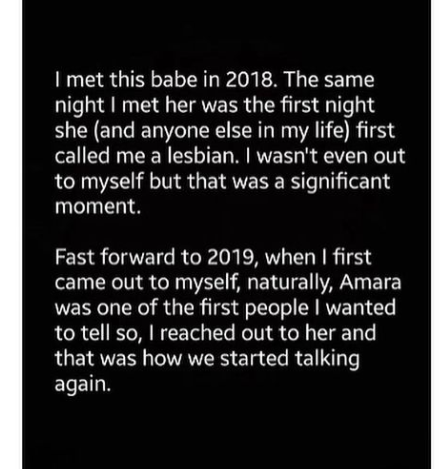 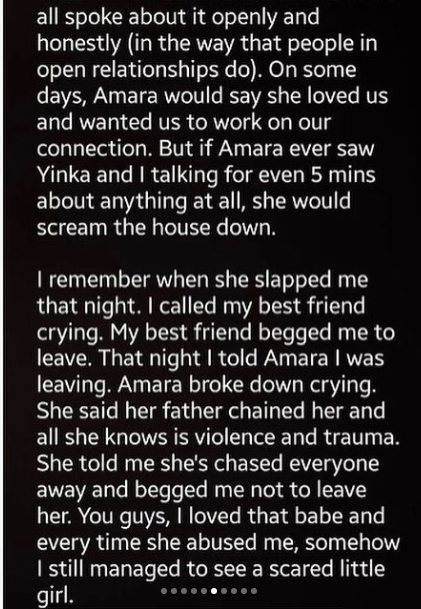 IGP orders probe of E-Money, withdrawal of his police escorts