Laila Charani, the fifth wife of Ned Nwoko says she is now divorced from the Nigerian businessman.

The model, who hails from Morocco, spoke out in a post via her Instastory on Tuesday.

“I just want to say no one has the right to talk about my marriage. Please stop talking about people’s lives. I have divorced already and nothing between me and him,” she wrote.

“Anybody following me because of him can unfollow please. Thanks. I’ll block any negative comment.” 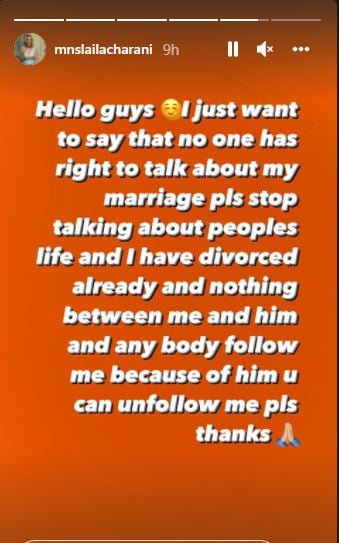 The circumstances surrounding Laila’s divorce from Nwoko are not exactly clear. The businessman man, in the past, has been open about his stance on polygamy.

In 2019 at the age of 59, Nwoko had married Regina Daniels, the Nollywood actress, who was then 19. This had fueled mixed reactions as many commented on the duo’s age difference.

Daniels and Nwoko had, in June 2020, welcomed their first child together.

But Nwoko would later reveal that the actress knows he can marry more wives to have more children.

“I met Regina; liked her. We got married within three weeks. I married all my wives within the same period. I don’t believe in dating anybody to marry them. Don’t date anybody you want to marry,” Nwoko had stated at the time.

“When you marry them, you begin to fall in love from within the marriage. Even in my culture, as it were as a kid in the 60s, people were not dating. They arranged marriages from family to family; they choose a wife.”

Burna Boy: I was on toilet seat when I was called for Coachella

VIDEO: Lady discovers her husband has no legs after wedding

‘My heart is shattered’ — Jamie Foxx confirms death of sister