Nasarawa varsity bans use of smartphones among students

The management of Bingham University in Nasarawa state has banned the use of smartphones among students of the institution.

The ban was announced in a memo dated January 18 and signed by Esther Dyaji, the registrar of the institution.

According to the memo, the ban followed “repeated abuse” of smartphones by students which is against the institution’s rules.

The memo said the ban takes immediate effect, adding that violators will be sanctioned.

“Violators of this would have their phones confiscated and face appropriate sanction.” 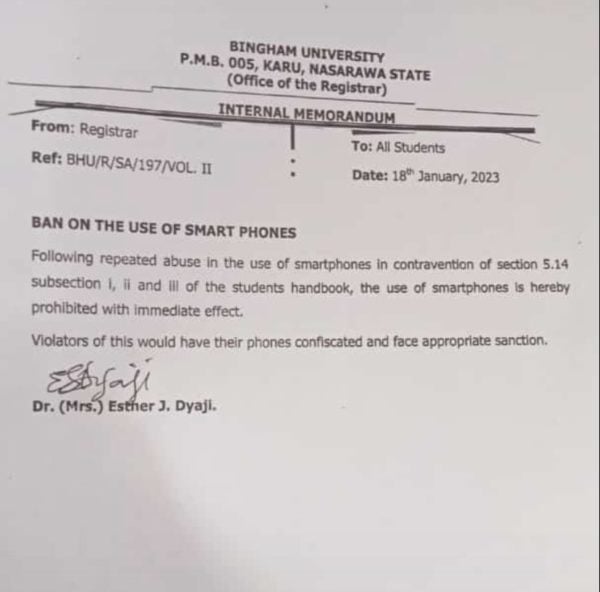 When TheCable Lifestyle reached out to the institution to confirm the memo, it said: “Yes we have banned smartphones. However, we allow the use of laptops”

Bingham University is located in Karu, 25 kilometres from the federal capital territory (FCT), and was established in 2005 by the Evangelical Church Winning All (ECWA) as a conventional varsity.

It is one of the six private universities in the north and the only one established by a Christian organisation.

In September last year, the varsity was in the news after a video of a student flogging his colleague surfaced online and went viral.

None of our lecturers was beaten by students, says UniAbuja (updated)