Kanye West, the controversial US rapper, says his addiction to pornography destroyed his family.

The award-winning rap mogul spoke about his pornography addiction and family during a recent Instagram rant.

In the now-deleted posts, Kanye West called out Kris Jenner, his ex-mother-in-law, for allowing Kylie and Kim Kardashians, her daughters, to get involved in the Playboy magazine shot.

“Don’t let Kris make you do playboy like she made [Kylie] and Kim do,” he wrote while addressing Victoria Villarroel, Jenner’s former assistant.

West also described Hollywood as a “giant brothel,” while vowing not to allow his daughters to get involved in the movie industry.

“Hollywood is a giant brothel Pornography destroyed my family I deal with the addiction. Instagram promotes it Not gonna let it happen to Northy and Chicago,” he wrote, in reference to his daughters. 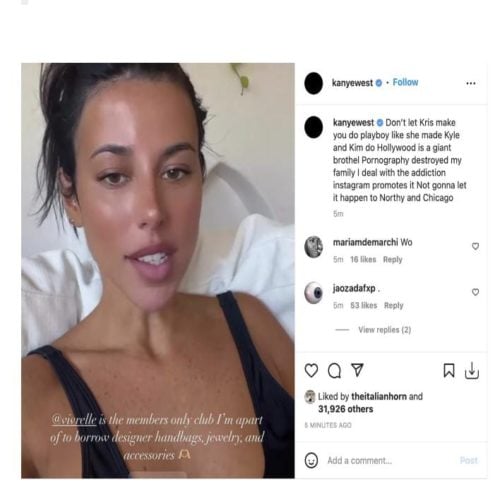 In another post, West, Kris, and Kim could be seen arguing about the school the kids will attend.

“My kids going to Donda, they not going to Sierra Canyon. Charlemagne the God and Kris. Get your motherfucking popcorn,” he added.

Kardashian filed for divorce from West in February 2021. They share four kids together — North, Saint, Chicago, and Psalm.

Watch the 2019 interview below:

“For me, Playboy was my gateway into full-on pornography addiction,” he had said.

“My dad had a Playboy left out at age five and it’s affected almost every choice I made for the rest of my life.”

I have performed in almost every country on earth, Burna Boy brags