Ismaila Mustapha, an internet celebrity better known as Mompha, has dismissed reports that he was included in a N157.1 million fraud charge against Sarumi Babafemi, an auto dealer better known as 606.

Reports had swirled on Monday that the Instagram celebrity was named in the amended nine-count charge bordering on money laundering against Babafemi and his firms by the Economic and Financial Crimes Commission (EFCC).

The fresh charge, said to be dated January 22, 2021 and marked FHC/L/CS/374c/2019, was reportedly brought before Chukwujeku Aneke of the federal high court in Lagos.

In the charge, Babafemi, Mompha and Ridwan Allison — said to be at large — were accused of laundering N157.1 million alongside Richard Ogbah.

Aneke, the judge, was said to have thereafter adjourned the trial till April 21, 22 and 23 respectively after weighing the views of the prosecuting and defence counsels.

But reacting in an Instagram post, Mompha dismissed the rumoured inclusion of his name in the fraud trial, urging the public to disregard such information.

The Instagram sensation also described such as attempts to “tarnish his image,” noting that the reports were nothing but “lies.”

“Why all this lies. Please stop tarnishing my image because none of this is true. Abeg ooo, I no want wahala ooo, una won use my name trend abi” he wrote in a mixture of English and Pidgin. 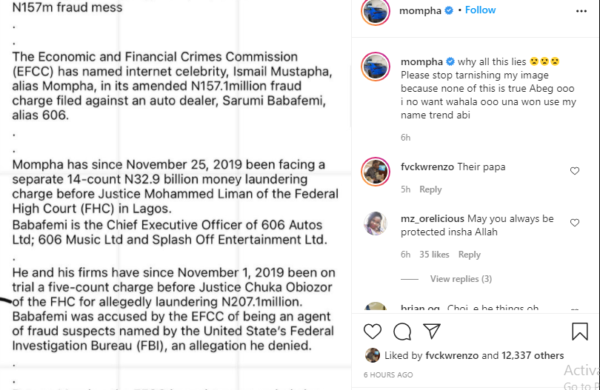 When contacted by TheCable Lifestyle, Wilson Uwujaren, EFCC’s spokesman, said he had no idea of the new charge.

“I don’t have anything on that for now,” he said.