Jude Abaga, the rapper and record producer better known as MI Abaga, has lamented the “dilapidated state” of the police stations in Nigeria.

The 39-year-old hip-hop recording artiste took to his Instagram stories on Wednesday to speak of his recent encounter at a police station where he said he spent two hours on Tuesday night.

Abaga faulted the “mental and working conditions” at the station. He also complained about the “dilapidation”.

The rapper stated that the country still has work to do towards bettering police stations while charging citizens to get their permanent voter cards (PVCs).

“We have work to do as a country. Vet your PVCs. No, really, get your damn PVCs.” 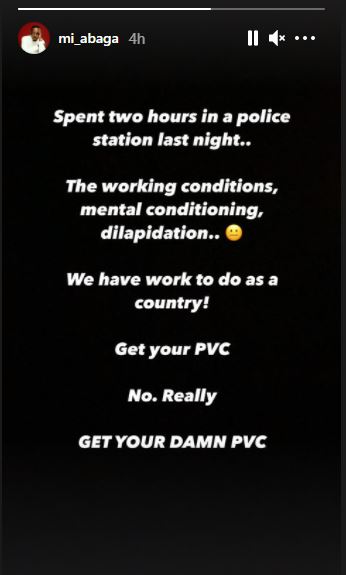 TheCable Lifestyle had in 2019 reported how the rapper made entrance to his shows in Jos and Abuja free but with a condition that fans enter with their PVCs.

MI Abaga is known for his social consciousness, which has bared itself in some of his musical releases in the past.

During the protest against police brutality in October 2020, the rapper had fiercely criticised the Muhammadu Buhari administration, alleging an attempt to “create chaos” in the country.

“It is clear that we are fighting against a government that is willing to kill you and then blame you for your own death. The authorities are intent on creating chaos as a pretext to intensify their crackdown,” he had said.

“One politician has even tried to whip up ethnic hatred – suggesting that the demonstrations are the South trying to plan a coup. This is a monumental moment in Nigerian history.

“For many young people, President Buhari represents an old and corrupt generation of politicians that have little left to offer the country.”

Ruggedman: Why was COSON suspended? Okoroji refused to go

Bauchi governor’s wife: I was a stark illiterate when I married my husband