Mercy, Tacha, Mike… here are the most talked-about 2019 BBNaija housemates

The Future of Work, a data analytics; consulting; and training firm, has found Mercy, a female BBNaija ‘Pepper Dem’ housemate, and the winner of the show, to be the most talked-about after analysing tweet sample drawn in the months of August and September.

The analysis, released hours before the show’s grand finale, had seen an eight-man research team collect tweets with hashtag #BBNaija between August 8 and 26 and another between September 1 and 17. 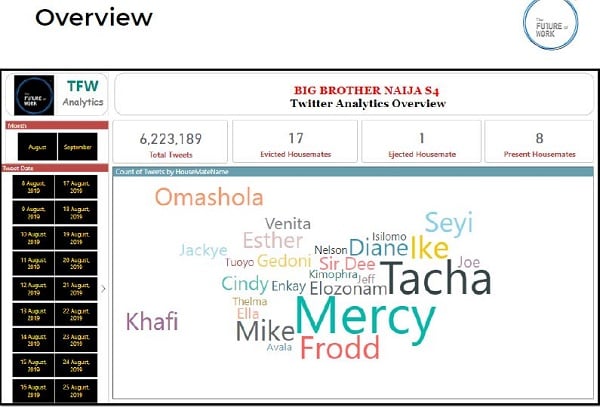 Here’s further insight on the five most talked about housemates of the ‘Pepper Dem’ house.

Conversations about the winning reality TV star revolved around her sex appeal, her relationship with Ike, her male colleague believed to be her love interest, which came underway at the beginning of the show. This is followed by her recent clash with Tacha which got her two strikes from Big Brother. 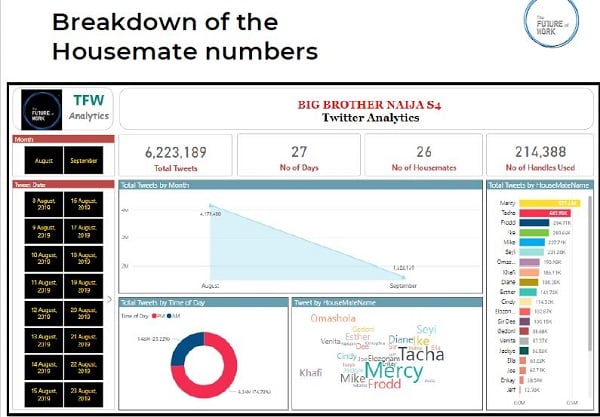 Also talked about were events that ensued between the 26-year-old housemate and her colleagues while cohabiting and having conversations with the likes of Diane, Thelma, and Esther, as they were nicknamed the ‘Power puff’ girls and became the most influential group in the house.

Tacha was mentioned in 487,891 tweets by 52,892 Twitter handles, the most dominant keyword in the tweets being “Drama Queen” and “No Leave, No Transfer”. Conversations about Tacha were found to be around her heated clashes with several other housemates.

She was nominated for eviction on so many occasions by housemates and, at some point, she started the “No leave, no transfer” slogan which she chanted during different activities to tell the other housemates that she would not be leaving the house regardless of their nominations.

More conversations generated from her recent clash with Mercy which resulted in her disqualification and spiraled into more internet outbursts as she was promised the sum of N50 million by Jaruma and N1 million from Bobrisky.

Frodd was mentioned in 284,710 tweets from 33,253 Twitter handles as conversations about him mostly bordered on his seeking a relationship with Esther, a female housemate who turned him down, and how he won Ultimate Veto Power with which he sent home Diane, a female colleague.

Ike was mentioned in 280,644 tweets by 34,760 handles. Conversations about him have been around his relationship with Mercy early in the reality show and the uncertain state of their relationship as Ike has been evicted from the house.

On his part, Mike came through with a total of  237,788 Twitter mentions from  24,746 handles as conversations about him were centred around his general interactions with other participants in the house such as Mercy and Tacha.