Mercy Eke, the winner of the 2019 BBNaija reality TV, says she is married and no longer in a relationship with Ike Onyeama, her partner on the show.

She spoke on Tuesday in response to fans who asked about her current relationship in the comments of her Instagram page.

Mercy said she’s now a married woman and that her relationship with Ike ended months before her birthday party.

She also promised to speak about “Mr H”, her mystery man, very soon.

“My dear sh*t was over two months ago, even before my birthday. I don’t know why they are still not contented with their stripper bae. I’m happy with Mr H. Will be speaking on this real soon,” the reality TV star explained. 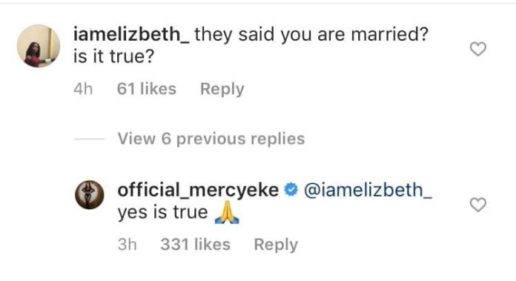 The reality stars had earlier aimed thinly-veiled digs at each other on social media.

In a now-deleted tweet, Mercy wrote: “When a man is useless, I mean very useless in every aspect of life, I mean to the point that his family is aware of his uselessness, drop him like used sanitary pad that you will never use again.” 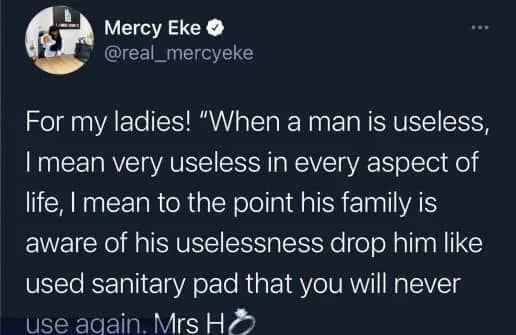 On his part, Ike wrote: “Never get jealous when you see your ex with someone else, because our parents taught us to give our used toys to the less fortunate.”

Checks by TheCable Lifestyle on Ike’s Instagram page showed he has deleted the birthday post he made for Mercy on September 29.

In October 2019, Mercy became the fourth winner of the BBNaija. She had been romantically involved with Ike during their time in the reality TV show.

Ghanaian police search for Shatta Wale after he was ‘shot’