King West, a son to Musiliu ‘MC Oluomo‘ Akinsanya, chairman of the National Union of Road Transport Workers (NURTW) in Lagos, has slammed those who call his father a “tout”.

MC Oluomo recently attended the graduation ceremony of his twin children — Kehinde and Taiwo — in the United States.

The Lagos NURTW boss took to his Instagram page on Saturday to celebrate his children “for making me proud” in a series of touching notes.

King West also shared photos of his siblings and his father at the graduation ceremony on his Instagram stories.

He, however, accompanied the post with a cryptic note which read: ”What did you say about a tout? Well all I know is he is better than most of your pops”. 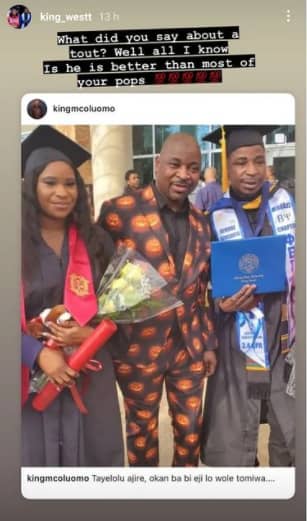 The Lagos NURTW chairman has been in the spotlight on numerous occasions over his perceived low education profile.

In 2020, Oluomo spoke of the widespread controversy about his educational background.

He had recalled how problems with family members left him struggling to make ends meet during childhood.

“When those who don’t know me meet me, they’ll say they were expecting some huge person or tout that smokes weed because of the type of job I do,” the transport businessman had said in Yoruba.

“But you can’t compare nowadays to what is obtained before when it was all riots with cutlasses to claim ownership of garages.  When you get to meet me, you’ll find that I’m a gentleman. As an MC, I’m a man of the people.

“It took us that to get to where we’re.  At that, one can decide to finance one’s education in adulthood as long as one is healthy. No time is too late for education. And I’m doing what I can.”

In November, Oluomo became an honorary member of the Institute of Corporate Public Sector Professionals (ICPSP).