‘You could incite genocide’ — Maraji sparks outrage with religious comments

Gloria Oloruntobi, Nigerian comedienne better known as Maraji, has stirred up a hornets‘ nest on social media after she made a sensitive statement concerning religion. 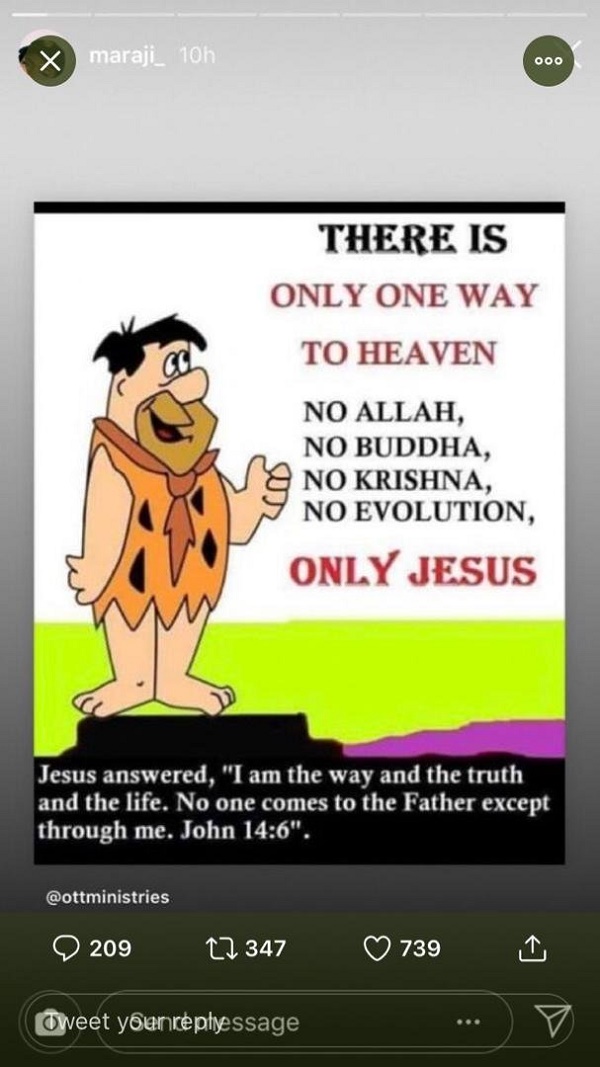 “There is only one way to heaven, no Allah, no Buddha, no Krishna, no evolution, only Jesus,” the meme read.

The statement appeared to have emanated from a conversation with a user who sought to know if “we actually worship the same God.”

“Not trying to offend anyone but the truth is offensive,” she wrote.

The post was shared on Sunday, while Muslims celebrated the Eid-al-Adha festival also known as the ‘Feast of the Sacrifice’.

Her comment has, however, provoked differing reactions among Nigerians on social media platforms, especially on Twitter, where it is currently top of trends.

While a segment of users defended her for “sharing her religious beliefs”, others condemned her for “picking the biggest day in the Muslim calendar to post that”.

“Maraji is a terrible human. She had to pick the biggest day in the Muslim calendar to post that. Do you know that could incite crimes & genocide against humanity? especially in Nigeria where there’s Christian-Muslim strife. 50 people killed themselves in Kaduna not too long ago,” a Twitter user said.

“Maraji is an Instagram comedian. This means her IG account is her office. Imagine your neighbourhood supermarket telling you over the loudspeaker on Eid that Jesus is the only way (or on Easter, that he isn’t). I follow her on Twitter for her jokes, not her opinions,” another user said.

Maraji is a terrible human. She had to pick the biggest day in the Muslim calendar to post that. Do you know that could incite crimes & genocide against humanity? especially in Nigeria where there’s Christian-Muslim strife. 50 people killed themselves in Kaduna not too long ago.

Imagine your neighbourhood supermarket telling you over loudspeaker on Eid that Jesus is the only way (or on Easter, that he isn't).

Let's stop pretending to be shocked at what Maraji said.

I love Maraji, but this is quite offensive. I mean, she can preach about Christianity & Jesus without slamming other religions. She can win souls through the right preachings. Let people practice what they strongly believe in. At the end, it’s only God that can be the judge. pic.twitter.com/dAIcxDwXoP

Just seeing this on Maraji’s page, and in as much as it might just be her personal opinion, I must say the mentality is actually shallow. This is why I still say Christians are largely misguided. pic.twitter.com/tys2mluXRI

Preach the Word of God in season and out of season.

Maraji preached the Gospel. The gospel doesnt have a particular day for it to be preached and not be preached.

If you say Maraji is wrong then you saying it's wrong for Christians to preach the Gospel.

Imagine not being able to talk about Jesus because "you're a public figure" and it would be insensitive to your fans. Y'all are canceling Maraji for the same thing the jews cancelled Jesus for. He is the son of God, he died and rose on the third day, he is God

Maraji shared her Christian beliefs. Don't y'all use your religions to be homophobic? This is where you draw the line? Lmaooo!

Christianity teaches that only Jesus is the true way to God. If you have issues with it, now you know what religious chauvinism feels like.

The Christians roasting Maraji are the most stupid set of people on this planet. I can’t even believe this.
If you can’t stand for Christ at all times because it’s a “sensitive” topic then are you even a Christian?

I, a Muslim am not angry at what maraji said then why are you, a non Muslim angry?
Remember that people are also entitled to their opinion.

Lastly, as y'all want to cancel Maraji, don't forget to cancel your Bible and your preacher in church. Shalom 💖

I hope Maraji speaking about her religious belief doesn't upset your woke sensitivities. What she said wasn't disrespectful. Not everything should be outrage. We all can't see the world the same way.

Thinking what Maraji said is offensive is like saying being a Christian is offensive, no one should be offended. If a Muslim says what they believe in and that they don’t believe in Jesus I wouldn’t be offended because we cannot all believe in the same things.

I woke up & saw Maraji trending & I thought oh wow, new video for me to watch/laugh. Only to see her trending for this, well honestly IDC what she thinks. As Muslims, we believe in Jesus as the prophet of Allah not son of GOD, we believe we're going to Jannah😍 so na she sabi fam pic.twitter.com/VpwlMCclVg

Maraji is trending for basically reminding people of the foundation of Christian belief….. And in extension the foundation of all religions that theirs is the only way. This outrage is exactly why I became a part of no religion, it's all inherited anyway.

Y’all should stop pretending to be shocked that Maraji said what she said. Might be insensitive but that’s her belief and that of many other people too.

*Religious Twitter having a meltdown cause of Maraji's comments*

Girl is a Christian and she's being a Christian… I wouldn't be offended if a Muslim says other wise in preaching the gospel, the Word has been there for thousands of years but you chose to bash Maraji because she's a celebrity? Nah, leave the poor girl alone
♥ pic.twitter.com/eJZ6v5cElu

Maraji let out her opinion and people aren't having it, she doesn't have to seek validations from anyone to do that.
Now the issue is "Wrong opinion" or "Wrong Timing"? pic.twitter.com/tSingTY5ks

So i just saw this on Maraji’s story and it really rubbed me off the wrong way.
Why is it so impossible for some Christians to fathom the idea that theirs is not the only way?? pic.twitter.com/Bgo3xc6vv6

Maraji! Said what she said! She aired her own opinion.

Muslims : There's no other God except Allah!
And nothing happened!

Now a fellow Christian aired her own! It's now a problem! Tf People! #mondaythoughts pic.twitter.com/1TwyB0xqtx

I do not dispute or contend with Maraji over her post, but one thing I ve learnt is:
Religion is a very sensitive issue in Nigeria
therefore
as much as possible
I stay away from throwing out my opinion into an uncontrolled public space.
We could have One on One conversation pic.twitter.com/ns3TKiunX1

While @Maraji_ is entitled to her belief that all religions other than Christianity are false, she’s insensitive to her fans in that regard. We all believe our religion is THE answer, but there’s wisdom in knowing how to deal with a diverse society, especially as a public figure.

Everyday on radio, Muslims reiterate their quote saying 'There is no other God except Allah', did anybody dispute that 🤷‍♂️? No! But Maraji aired her own opinion yesterday and y'all are vexing 🤣

I won’t have gone far as musician if I took drugs, says KWAM 1