Lola Omotayo, wife of Peter Okoye, the singer, has given Wizkid relationship advice — a few hours after he claimed he is single.

On Monday, the ‘Ojuelegba’ crooner took to his Snapchat handle to reflect on his love life. In a terse post, the musician claimed he had been “single for so long”.

“Been single for so long. Gotta find me one or two,” he had written.

The post has continued to raise concerns about Wizkid’s relationship with Jada Pollock, his manager and baby mama.

Joining the fray, Omotayo told Wizkid that there’s nothing out there “but vultures waiting to devour and conquer.

“Nothing out there but vultures waiting to devour and conquer bro @wizkidayo. More love, less ego #lovewins,” she wrote. 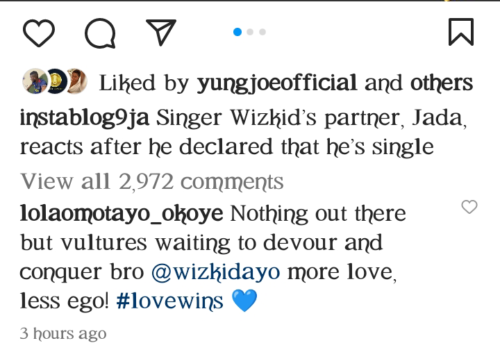 In one of her tweets, the talent manager, who recently welcomed her second child with Wizkid, wrote: “controlling emotions”.

She also replied to a user who insinuated Wizkid had broken her heart.

Quoting the tweet, Pollock wrote in a now-deleted post: “Taking arguments to social media is never going to end well.”

Having a good wife is a blessing, says Mercy Aigbe’s ex-husband as he remarries