Lilian Afegbai, a Nollywood actress, has deactivated her Instagram account, shortly after an old video of Carol Afegbai, her mother, recounting the killing of Ibrahim Momodu, a student, in 2013, surfaced online.

The actress had earlier joined #EndSARS protesters to condemn police brutality in the country.

But some Nigerians had called her out, recounting how Carol killed Momodu, a student of the University of Benin (UNIBEN in Edo state, years ago when she was a divisional police officer (DPO).

The actress had dismissed the claims, noting that her mother, who was the DPO of Ogida police station in Benin then, had no hands in the student’s death.

“As per my mother being dragged for murder, to the best of my knowledge my mother who is now retired did not kill anyone. The police officer (AMADIN IDAHOSA) that was attached to my mother’s station who killed the suspect was sentenced to life imprisonment by Justice R. Irele-Ifijeh of the High Court of Justice, Edo State in Charge No: B/CD/24C/2014,” she had said.

A day after her denial, however, a video wherein Carol could be seen speaking on the murder had gone viral online, forcing the movie star to deactivate her Instagram account.

Checks on her account on Tuesday by TheCable Lifestyle showed it had been deactivated. 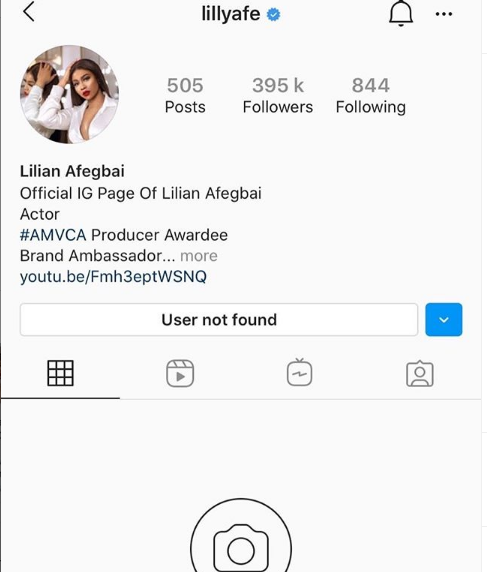 In the now-viral video, Carol had explained how she mistook the student for an armed robber as the incident took place at night.

“It happened in the night, he didn’t talk, he didn’t utter a word, we don’t know his name, we don’t know where he came from, only the one that escaped and if we fired gun at him it will meet innocent people,” she said.

The retired police officer also explained that her team did not rush the student to the hospital after he was shot for fear of being attacked in the night.

“To save the armed robber that wants to attack my men? If we are attacked what happens? Will l say I accosted by armed robber on my way to hospital and then we were shot… It’s night and I don’t know who is who, so I can’t take that risk,” she added.

Quite a number of Nigerians have since taken to Twitter to register their different opinions on the matter.

Lilian Afegbai has actively supported the #EndSARS movement. We appreciate her for that, but we still want her mother to be prosecuted if found guilty PERIOD!!!

Lilian Afegbai is living her best life and her mother murdered someone in cold blood. This is not fair, this is not right. Someone’s child is dead, gone forever 😭💔

So………. That is how just one video from Lilian Afegbai exposed the atrocities of her mother

LOOK AT GOD!
JUST LOOK AT GOD!!
The God that doesn't harbor the wicked

Lilian Afegbai has used her talkativeness to exhume her Mother's Atrocities….

Dear Lilian Afegbai,The enegy you used in Screaming at us in this Video,Help us use it to parade Mrs Carol Afegbai ♥️+💡 #EndSARS https://t.co/scOgoaO8NW

Ask Lilian Afegbai why her mother carried out extra-judicial killing of Omosigho who was a resident of 179 Siluko Road, Benin City, Edo State? I don't support stealing but as a police officer why didn't she arrest & charge him to court?
Tell Lilian her mom is a murderer. #endsars

Lilian Afegbai, tell your mother to fall out!!!

She's a cold hearted murderer and she won't know peace till she pays for her crime!

Lilian Afegbai has strongly supported the #EndSARS movement but sadly her mum Carol Afegbai was a Police Officer who brutally killed Ibrahim Momoh in 2013.

Do we appreciate Lilian's support? Yes

But we want her mother Carol to be charged & prosecuted. End of story

That Lilian Afegbai mum's matter, we must resurrect it. The student she killed was in SLT, life science faculty, Uniben. I remember my neighbors went to protest, shocked she got away Scot free. We need to tag the handles that can begin investigation, Ibrahim has to get justice.

Don't come to my TL to be unfortunate because Lilian Afegbai is your idol. I heard of her yesterday. But I knew her mother Carol Afegbai in 2011. She stopped me on my way from church on Sunday morning and pointed a pistol at me. Arrested me as an armed robber.#EndSARS

So Lilian Afegbai posted screenshots from her mother's case on her Instagram page, which shows that it was murder and someone else took the fall for it. Terrible. #EndPoliceBrutality pic.twitter.com/ByLFoxy1vQ