The assault suit filed against Sanni Goriola, the Nigerian singer fondly called Lil Frosh, by his estranged girlfriend has been withdrawn.

Okeoghene Iyomaterie, who is better known as Gift Camille, had sued the singer for physical assault.

Lil Frosh, who had denied the allegations, was invited by the operatives to the Federal Criminal Investigation and Intelligence Department (FCID), Alagbon in February 2021 for interrogation.

He was later remanded in prison.

This had prompted backlash and widespread condemnation from prominent celebrities and fans.

In a recent post shared on Instagram, Camille said she has dropped the suit against the singer.

“I want to thank everyone that stood by me throughout the incident between Lil Frosh and I. I will also state that the case between I and Lil Frosh has been withdrawn from court and we are on good terms. Thank you,” she wrote. 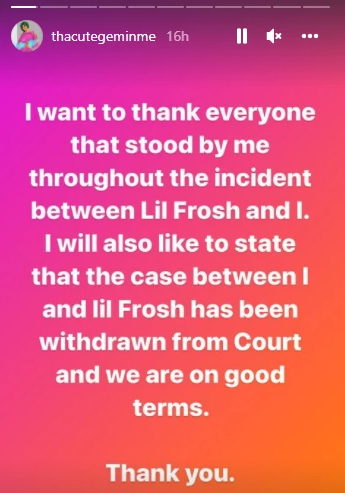 Lil Frosh also shared a letter from his lawyer notifying the public that the matter has been resolved.

“On the 10th of February, 2021 a criminal charge was instituted against our client which has caused a change in our client’s trajectory,” the letter reads in part.

“However, it has become imperative that we notify the public and well-wishers that the parties in the criminal suit have reconciled and charges brought against our client was withdrawn on the 14th March 2022.”

‘Has it come to this?’ — Kiddwaya reacts as ‘fan’ threatens him over Erica

Helen Paul: I was once advised to indulge in scandals to become popular